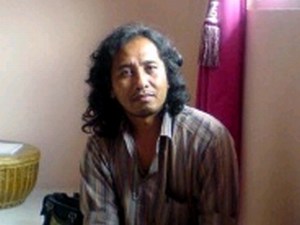 “Berbilah-bilah rencong/dengan sarung dan tangkai berkilap/tak lupa kami selipkan/pertanda /martabat/dan keagungan/betapa pedih hati kami/dari Jakarta/kalian hujamkan mata rencong itu/tepat di jantung kami” (Blades of rencong/with their shiny sheaths and handles/we do not forget to put on/as a sign/of dignity and greatness/how our hearts bleed/from Jakarta/you stab the rencong/right into our hearts.) The poem is among Acehnese poet Fikar W. Eda‘s favorites and he regularly reads it at events across the country. Aside from “Rencong“, Fikar is noted for other works like “Seperti Belanda” (Like the Dutch, 1996), which dwells on the “greed” of Jakarta. Both “Seperti Belanda” and “Rencong” point out the sadness felt by many Acehenese for what they see as the unjust and arbitrary treatment of the Indonesian government. Aceh experienced almost three decades of bloody conflict which ended only when the government signed a peace deal with the Free Aceh Movement rebels.

Fikar, like many other Acehnese artists, always associates Jakarta with Indonesia and points out that the rencong, which looks like a kris but is a traditional Acehnese dagger with a curved handle, is not merely a weapon but also signifies dignity according to Oyos Saroso H.N.

Fikar’s excellent stage act captivates his audience and he usually enjoys a big applause after reading these two poems.

The 42-year-old is part of an art movement waged by the Acehnese against the arbitrariness of the perceived ruler.

With his poems, Fikar serves as the “spokesman” of the Acehenese, who for many years suffered while the province’s natural wealth continued to be extracted and taken out of the region while only a small portion was enjoyed by the Acehenese.

“When people were afraid of writing about human rights violations in Aceh during the New Order times, I wrote about Soeharto’s policies in my poems,” he said. “I aroused the awareness of people through poetry.”

“Even when Soeharto no longer exists, people’s awareness must continue to be aroused so that human rights violations will never be simply forgotten,” said the native of Takengon in Aceh.

Aceh can boast a long history of literature and resistance.

Between the 17th century, when Europeans began to occupy the region, dubbed as the Veranda of Mecca, up to the 19th century, the Acehnese put up resistance.

The resistance by the Acehnese against the colonial powers can be seen in Acehnese poems of the past. The most famous verse in this respect is “Hikayat Prang Sabil” (Chronicles of the Holy War) written by Teungku Chik Pantee Kulu during his voyage from Jeddah to Pinang Island after completing his haj pilgrimage. The verse was later given to Teungku Chik Di Tiro in Sigli, Aceh.

In the 14th century, when the Portuguese attacked Aceh,
“Hikayat Prang Paringgi” (Tale of Paringgi War) was written. The piece is a very touching poetic work arousing the spirit to go to war; it says that dying in battle is to die as a martyr and this is the dowry to get an angel in heaven.

Now, many modern Acehnese poets write things related to political and security problems resulting from the long conflict with Jakarta, as can be seen in poetry collections like Aceh Mendesah dalam Nafasku (Aceh Murmuring in My Breath) and Kitab Mimpi (Book of Dreams).

Fikar, a father of three, is one of the most prominent modern Acehnese poets and is known for the aesthetic excellence of his work and his active role in various campaigns to defend the rights of Acehnese.

“His skill in creating rhymes characteristically shows the Takengon oral tradition in his blood. This is a collection of poems written by a romantic poet swept by sorrow and concern when witnessing how his home village has been destroyed as a result of the politics of power without ethics,” Rendra writes in the introduction to Fikar’s poetry collection Rencong.

Having completed his studies at the School of Agriculture at Syiah Kuala University in Banda Aceh, Fikar decided to make his career as a journalist.

Now working as a journalist for Serambi Indonesia daily, Fikar highlights the sorrows experienced by Aceh and its people.

Even long before the tsunami devastated Aceh back in 2004, Fikar was chairman of the Literary Commission of the Aceh Arts Council and also chairman of the Institute of Acehnese Writers (Lempa), before eventually moving to Jakarta.

Later he also led art campaigns in defense of the human rights of the Acehnese on various campuses and entertainment places in Jakarta. These campaigns involved many Indonesian poets.

“We read poems in cafes along with some Indonesia’s noted poets. The money raised was donated for the Acehnese,” Fikar said.

Post-tsunami rebuilding of art and culture in Aceh, Fikar said, is not easy as many traditional and modern artists from the province lost their lives in the disaster.

“Luckily Aceh is not rich only in oil. Aceh is also rich in the young generation of artists, who continue their creative process. They are the cultural assets of Aceh. They are the future of Aceh’s art and culture,” said Fikar.

Fikar, also the chairman of the Forum of Indonesian Authors, said his activities as a poet and as a human rights activists had never disturbed his profession as a journalist.

“A poet who is also an activist and a journalist is actually richer than a poet whose activities are confined to the literary world only. As a journalist and an activist, I can get more information. Then I process all these experiences into poems that will later become public property.”

Regarding his activities in the human rights movement for Aceh, Fikar said that as an Acehnese now living in Jakarta, he could not just sit idly by witnessing the destruction of his home.

“I continue to establish contact with my friends in Aceh and in other regions in Indonesia. The point is that we would like to see the re-awakening of Aceh,” he said.