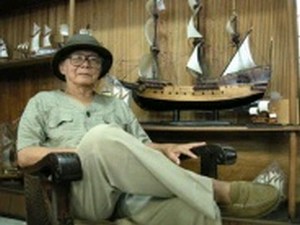 Traditional miniature boat craftsman Djuhhari Witjaksono is happily spending his retirement days creating models of old ships alongside jobless youths. In his residence on Jl. Brawijaya in Mojokerto, East Java, he keeps dozens of books on traditional boats from all over the world. His library collection also includes books on the history of the Majapahit kingdom and Adrian Horridge’s The Prahu, a book on traditional sail boats of Indonesia. Once an active scout, the 77-year-old remembered the words of world scout chief Robert Baden Powell: “Walk until you come to a land, sail until you come ashore.”

“I like reading books on religion, world history and maritime matters, from which I’ve gained a lot of knowledge and learned about the meaning of life,” said.

Although he had yet to grasp the gist of the advice, Djuhhari said these words were what initially got him interested in learning about maritime matters, particularly shipping as Indra Harsaputra explains.

“I was amazed by Portuguese wooden boats, which survived around-the-world voyages and harsh challenges at sea. I then tried to make models of the vessels,” Djuhhari said.

After years of making model boats, Djuhhari finally came to understand Powell’s inspirational words: Land and sea journeys are difficult tasks. In order to overcome violent sea waves and arrive at their destinations, boats need to be strengthened to face such adverse conditions.

“The difficulty in building strong boats is the intricacy involved. Patience is needed to assemble parts one by one,” he added.

Born in Malang, East Java, on December 15, 1930, Djuhhari is a member of a large polygamous family — with two fathers and three mothers.

“My fathers worked as truck drivers, so did my older brothers, while my mothers were jobless,” said the youngest of four siblings.
Due to financial constraints, his brothers dropped out of primary school to help their fathers. Towil Pawirjo, Djuhhari’s biological father, wanted him to continue with his studies instead of leaving school to work.

“My dad worked very hard to enable me to attend high school. He taught me to pursue my goals.”

Graduating from technical high school, Djuhhari worked with a road-building contractor. Working across the country, he had the opportunity to learn about the life of fishermen in various parts of Indonesia. After retirement, he devoted his time to building miniature boats; later inviting unemployed youths living nearby to work with him.

“Many people wish to enjoy their retirement without work. But I want to keep working to help others,” said the man who teaches jobless youth in his home town the art of making miniature model ships.

“The masts of this boat should be refined further, then fit into their proper slots. Remember, don’t slot them in the wrong places, which will change the boat’s original shape,” said Djuhhari as he instructed a young man with tattooed arms who was working on a model of the “Dewa Ruci“, a traditional Indonesian ship.

Djuhhari keeps dozens of various models of traditional boats in his workshop and sells them from Rp 7,500 up to Rp 600 million, according to their sizes and the degree of intricacy involved in the building process.

Djuhhari’s boats are sold both locally and abroad. His models have been recognized by the world market, as evident from the Seal of Excellence for Handicrafts awarded by the UN Educational, Scientific and Cultural Organization in 2006 for his boat from the Majapahit kingdom.

The Majapahit miniature prahu (boat) model was created after he had read dozens of books on the history of the Majapahit kingdom, with its sovereign seat based in Trowulan, Mojokerto regency, some 20 kilometers from his home.

“This model serves as a reference … in the Majapahit era traditional boats were built in a no less elegant shape than those made by the Portuguese,” he said.

Sadly, during the Dutch colonial period, local ships that could cover hundreds of nautical miles no longer appeared following a regulation that banned indigenous people from building boats that could carry more than 20 tons.

After that, traditional boats were made smaller and were only used for fishing. Meanwhile, nations like Portugal, Britain and Spain continued to evolve their wooden ships capable of sailing long distances

“Besides training youth and giving them a job to do, I also advise them to remember that in Indonesian history our ancestors were seafarers,” said the recipient of a 1991 presidential Upakarti award.

The young men who help Djuhhari with his work receive wages and food allowances. But Djuhhari, who started this enterprise in 1980, has never prevented his employees from opening a similar business. Rather, he encourages them to open such businesses by providing the capital for their independent ventures.

So far, hundreds of his former workers have opened miniature boat businesses in other places; from Central Java to Jakarta.

“I’ve always told my trainees to teach other members of the younger generation when their businesses thrive, so that their peers will be independent and proud of their ancestral history.”