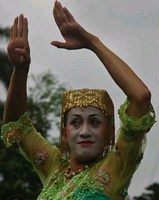 People usually look down on buskers or roadside performers, assuming they are too lazy to work and are content earning a few pennies on the street. But not Didik Nini Thowok, who believes busking can actually serve as a way to preserve cultural traditions and even attract tourists. Born in Temanggung, Central Java, the 54-year-old man said a group of traditional artists had recently been given a space to busk in the city center, on Jl. Malioboro. “Busking can become one of the ways to develop Yogyakarta as a culture-based tourist city,” said Didik. “But this activity has to be supported by all parties, since most groups of traditional artists are not financially secure,” he said. Didik said he believed that regular shows by traditional art groups would help both the artists and local cultures survive. He added busking by artistic groups could also become a powerful attraction for tourists, especially foreign visitors.

Dressed as a woman, his flexible dance moves and funny gestures made his show a popular attraction for both local and international tourists to the area. The money that onlookers gave him was donated to help orphans and people that needed financial assistance.

But his afternoon show was brought to an end in late 2007 due to financial constraints: He could no longer afford the make-up and costumes he needed for him and his crew.

“We were running out of money and there was no sponsor. We stopped performing for several months,” said Didik, adding he had been attracted to the arts world since he was young.

When Didik was 12, he began to learn to dance and to nembang, or sing Javanese songs accompanied by a gamelan orchestra.

In 1971, Didik successfully choreographed a performance titled Tari Persembahan (Worship Dance) with movements that combined Balinese and Javanese dancing. His first performance as a female dancer came in 1972, when he graduated from senior high school.

After graduation, he was unable to continue his studies due to financial constraints. He spent two years working different jobs and saving money before he was able to enroll at the Indonesian Dance Academy in Yogyakarta in 1974.

Didik became a household name after he danced together with Sunaryo in Nini Thowok, in which he took on the role of an old paranormal woman called Nini Thowok. The show became a huge success and the name Nini Thowok remains well known till now.
From that experience, Didik realized he was better suited to women’s dance roles with a comedy theme.

Through his street show, Didik said he hoped to wipe out negative images of busking in the city.

“But of course this has to be followed by a change in the busker’s behavior,” said Didik.

He added busking was a means of expression for artists and said they should be given the space to develop their skills.

“It’s a pity that the process of learning and developing oneself through busking is gone, but I want to revive it,” he said.

Didik got the idea of encouraging artists to preserve traditional arts through busking to attract people, including tourists, from his many trips to foreign cities like Paris and Barcelona.

He said buskers in the foreign cities he had visited were appreciated for their artistic expression; even famous artists busked on the streets.

“Here (in Yogyakarta), it’s different. The buskers simply play a tune, collect their money and then they’re done. Why would a famous artist want to perform here (on the street)?” said Didik.

After fighting alone for many years, Didik’s ideas of developing Yogyakarta as a culture-based tourist city are starting to materialize.

As of April 19, Didik was back performing on Jl. Malioboro along with other local traditional artists. This time, their activities were backed by the Yogyakarta city administration.

Didik’s street show is now held every Saturday, from 7 p.m. to 10 p.m. The administration has even set up a stage in front of the Vredeburg fortress to support the show.

With busking now “legal” in Yogyakarta, visitors to the city can look forward to seeing traditional cultural performances, including Didik’s show, up close.