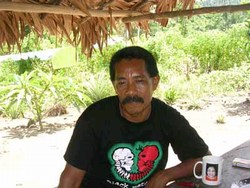 It took Demianus Bagali months of walking in the wild forests on Halmahera Island, North Maluku province, to discover White Land Hill, home to the most beautiful birds in the land of spices. Anu, as he is commonly known, recalled days spent cutting down trees and waist-high jungle grass to track down the Halmahera fairy birds, named Wallace’s Standardwing Bird of Paradise, or Semioptera wallcei, the province’s endemic treasure he lost track of so long before. Upon the 45-year-old’s reunion with his rare companions, he set out to introduce his discovery to all bird lovers. Now, the road to the area, which is divided by streams of clean beautiful rivers, bears the uncountable footprints of tourists from all over the world, and has become an internationally renowned bird watching sanctuary. Anu said his love for the Fairy birds began when he accompanied Australian ornithologist David Bishop on a research mission in the early 1980s.

He followed Bishop through wild forests, up steep hills and endured long hours spent waiting in silence, scanning for birds with binoculars and other tools according to Lilian Budianto.

“We were moving within Sidangoli, Tobelo and Galela,” Anu told a group of journalists from Jakarta before going to White Land Hill to see the fairy birds.

He said the job was very boring at first to the extent that he had even planned to abandon his charge and return to his life as a saw operator at a logging company.

“I hated bird watching so much at first that I was thinking of running away and leaving David alone.”

However, Anu changed his mind and eventually fell in love with the passion after Bishop had patiently taught him how to identify bird species.

Bishop taught Anu how to name birds in English, sketch them, record their sounds and ways in which to observe rare birds for research purposes. Seeing his improvement in the art, Bishop entrusted him to continue the work along.

“I felt really proud of myself when I managed to record rare birds by myself,” he said.

During his two-year research with Bishop, Anu, who was only a primary school graduate, recorded 114 different species, 27 of which are native to North Maluku. His name was acknowledged in Bishop’s book A Guide to The Birds of Wallacea, which is available worldwide.

After Anu finished the research with Bishop, he continued to accompany researchers and bird watchers in Sidangoli.

In 2000, during the escalation of the Maluku conflict, Anu was forced to leave Sidangoli and his birds to move to Manado, North Sulawesi.

He returned to Sidangoli two years later only to discover his home and fairy birds were gone.

“After the conflict, I had to start from scratch.”

But his love for fairy birds steeled him to locate the animals, which English naturalist Alfred Russel Wallace referred to as the most beautiful birds in Halmahera.

“As I walked alone in the forest day and night, I had only one thing on my mind: I have to find back the love of my life, the fairy birds.”

He finally found them at White Land Hill. “At first, I spotted around nine birds, but later I found a total of 15. Twelve male and the rest female.”

He lives there with his wife of two years. The couple has been kept busy with incessant visitors, many of whom choose to stay in his two-story hut or to erect tents nearby.

Anu’s wife, Marce, sees that all visitors are well nourished, serving them delicious vegetables picked from the forest and fresh fish she catches from a nearby river.

All meals, rice and water are cooked in clay pots sitting on wood fires. Showers are available in the nearby rivers, and Anu will shop in the Sidangoli market, several kilometers from their home, should the need arise.

Anu said he loved his peaceful life in White Land and wanted to spend the rest of his life there. However, even this simple dream may be taken from him as the local government has allowed a foreign mining company to scout the remote area and its forest for limestone.

White Land Hill is rich in limestone, the basic ingredient for paint, cement and ceramics.

Taking a trip to White Land Hill with Anu, one can see where the name derives from. The area is formed almost entirely of limestone deposits hidden by forest. Explorers hardly need to dig to uncover the precious material beneath.

Anu said he had tried his best to persuade the government to reconsider their plan to issue the permit because the fairy birds would surely move elsewhere should their habitat be destroyed.
“But it is hard,” said Anu while taking us up and down the forest pathways he made four years ago.

Along the way, one can see the markings in the forest where local residents have indicated the boundaries of their land in preparation for deforestation.

He said the local people had already surrendered, and that they had even claimed for themselves the wild forest, which lies far beyond their living places, to get compensation from the mining company.

“They said it was much better than giving up the wild forest for free because, after all, we realize we will lose it anyway.

“We have no proof it belongs to us, so they simply cut down the trees, and burn the forest grass to tell people we will lose our property if the land is taken,”

Anu said he planned to move to Lolobata, near the national park, if the nightmare became a reality.

“Fairy birds also live there,” said Anu while in his hut after we had returned from bird watching. His wife had prepared a delicious lunch of papaya leaves and roasted fish with rice.

“I will build a similar hut like this if I can afford it, and I plan to buy a speed boat to take my visitors to the Lolobata National Park,” he said.

“Fairy birds should not lose their fame just because they have to move somewhere else. I’ll still take tourists there to see them.”