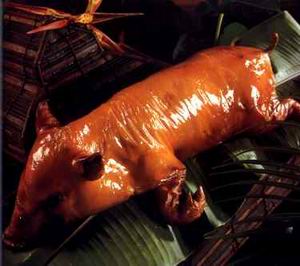 Go travelling up country anywhere in Bali and sometime or another you will come across a roadside stall cooking Babi Guling, the delicious odours you can smell a mile away. There are some great restaurants also that serve up the Balinese delicacy and one is Ibu Oka’s Warung Babi Guling as Trisha Sertori explains.

Squeezed in between Ubud’s central banjar and Jl. Suweta’s upmarket shops and restaurants stands the legendary Ibu Oka’s Warung Babi Guling. The food stall has stood here for the past 20 years, serving up what many say is some of the best roast suckling pig on Bali.

Search any Bali tourist Internet site and there is a good chance you’ll read rave reviews on Ibu Oka’s warung, at least according to a group from Shanghai sitting at a nearby table.

“We read about the suckling pig here (Ibu Oka’s warung) on the Internet and we had to give it a try,” said Lily Feng, a finance manager from Shanghai, adding that word-of-mouth reviews from friends also insisted on the trip to Ubud for an Ibu Oka roast suckling pig lunch.

Lily’s words are reflected in the warung’s tables, which are glutted with people from around the world along with local Balinese, filling the warung to overflowing.

And they are all digging in to Ibu Oka’s classic Balinese tucker: melt-in-the-mouth suckling pig that was spit-roasted for five hours before being carted on foot from Ibu Oka’s home kitchen and served hot and fresh to the waiting hordes.

Discovering just what makes Ibu Oka’s suckling pig so good demands a visit to that kitchen, and while a trip to her family compound just around the corner may be one short step in distance, its a 100 years in time.

And therein lies Ibu Oka’s secret: Her suckling pig is prepared and cooked as it has been for decades and, as the saying goes, “practice makes perfect”.

Stacks of timber line the walls of the compound, cubic meters of the wood delivered daily to heat fires that will cook up to 10 suckling pigs a day.

Half a dozen live pigs are housed at the back of the compound, snuffling, eating, sleeping and generally enjoying life before the pre-dawn kill that will have them cleaned, gutted, stuffed and spitted by 4 a.m., ready for the warung’s 11 a.m. opening.
Roast suckling pig doesn’t get fresher than this.

Prior to spit roasting, the pigs are packed full of Balinese herbs and spices, such as shallots, garlic, chili, ginger, galangal, turmeric and bay leaves, then roasted over an open fire for at least five hours. This is five hours of hot, heavy work for the cooks who rotate, non-stop, the wooden spit by hand, regularly dousing the flames with water to maintain the perfect cooking temperature.

Getting the temperature right is an art that has been handed down from generation to generation, the suckling pigs slowly developing that warm golden sheen that makes for the best crackling, the inner meat cooking slowly until it is utterly succulent.

Ibu Oka learned this art — along with the business — from her parents-in-law 25 years ago. She adds that her in-laws had been preparing babi guling for 33 years before she took on the business.

“The family has been making babi guling for almost 60 years. Two generations of us. Originally, the business started at the market. I ran it there for the first five years after my parents-in-law died, and then moved the warung to Jl. Suweta 20 years ago,” she said of the business that now involves her whole family.

As well as satisfying the appetites of her warung customers, orders for the famous babi guling come from far and wide, with hotels along Bali’s main tourist strips in Legian, Kuta and Seminyak ordering up big for special events, said Ibu Oka.

“We sometimes get orders from the big hotels. On those occasions we will prepare around 10 suckling pigs. It’s a lot of work,” she said. “Then we do many weddings where people order the babi guling and all the side dishes such as the vegetables and the blood sausages.”

She added that the warung on Jl. Suweta required four suckling pigs each morning to satisfy the hungry customers that come in droves.

Within minutes after it opens its doors, the restaurant is full to overflowing. Every table refills as soon as the early bird diners lick their lips is satisfaction before heading back to work, shopping or wandering Ubud’s central market.

Tasting the legend that is Ibu Oka’s babi guling will cost you around Rp 20,000, which includes roast suckling pig and the crackling, blood sausages, Balinese vegetables and rice. A small price to pay for this simple and delicious pleasure.