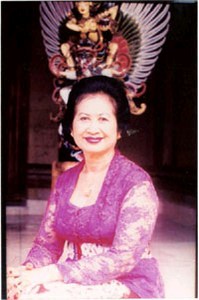 Homesick for Bali in 1956, Ida Bagus Kompiang and his wife, Anak Agung Mirah Asthuti Kompiang, sold their successful export business in Surabaya and used the proceeds to purchase a hectare of land on Bali’s Sanur Beach where they constructed 25 traditional bungalows and a small restaurant. A half century ago, Sanur was very much a sleepy seaside village with little grasp by anyone of what tourism actually entailed. In those early days, the Kompiang’s only neighbors were a Belgium painter Le Mayeur, a Dutchman and a local cemetery.

“All our friends thought we were crazy,” said Ibu Kompiang, who, together with her husband, introduced the then revolutionary ‘Bali Nights‘ at the hotel which presented local cultural performances and a Balinese culinary experience via the megibung. Friends were also perplexed that the Kompiang chose to build their hotel close to the beach – a place traditionally regarded as the home of bad spirits and evil omens. And, in any case, why would anyone want to stay in such a place? While Bali had been receiving foreign visitors since the 1930s, the Second World War and Indonesia’s ensuing fight for independence had all conspired to reduce tourism to a tiny trickle in the 1950s.

But, like Indonesia’s First President, the Kompiang’s shared a boundless enthusiasm for the Republic’s future and a deep love for Balinese culture.

Over time, the Balinese friends who initially came to gawk and scratch their heads at the Kompiang’s folly, came back to look for work as a steadily growing flow of celebrities and diplomats came to stay at the Segara Village Hotel. Ibu Kompiang fondly recalls guests who included many members of Jakarta’s diplomatic community, official delegations led by President Soekarno, Charlie Chaplin who arrived with a private plane and the General Manager of Jakarta’s Hotel Indonesia who stayed while he marked out the lot next door for the Grand Bali Beach Hotel.

Pak Kompiang is today a bright-eyed 80 year-old, who now turns his energies to other pursuits, including grandchildren and the veteran’s affairs. Ibu Ayu Kompiang still keeps an active interest in the hotel, although most of the day to day running of the popular hotel is now in the hands of their son, Ngurah, a prominent leader in Bali tourism.

Determine to keep up with the times and Bali’s increasingly competitive business climate, the 50-year-old Hotel is in the midst of a major renovation of all rooms and public areas in order to maintain their hard-fought status as a leader in Sanur tourism.