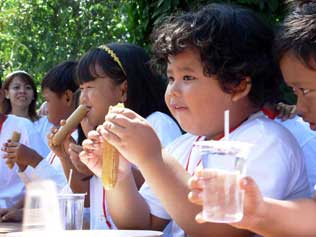 A new culinary business in Bandung has hit upon an idea to create a food that would lure an endless stream of visitors — as well as to take advantage of tourists to the West Java capital, located only an hour’s drive from Jakarta.

Around 100 elementary schoolchildren from several Bandung schools were invited to the July 7 opening of a new restaurant specializing in sausages, including a sausage-eating race, and from cooking to decorating sausages.

Why sausages? Because this is the theme food of the new House of Sausage, which was opened on Jl. Setiabudhi 295 by The Big Price Cut business group.

The sausage-shaping event seems to have been much enjoyed by everyone, from children to grandmothers.

The participants shaped plain and food-colored sausages into cars, houses and flowers with the help of toothpicks. Easy to bend and mold, they were able to fashion the food into the shapes they desired.

The creative competition was closed with a speed-eating contest to see who could eat a jumbo sausage the fastest. Many children had difficulty swallowing the meat and drank a lot of water to try and wash it down.

Intania, public relations officer for The Big Price Cut Group, said the restaurant made their own sausages with the meat from imported live cattle.

She said the beef used by the House of Sausage was top quality and did not contain dyes, preservatives or monosodium glutamate (MSG), which has been condemned by some health authorities for its alleged carcinogenic properties.

“We guarantee our sausages are fresh, and are pre-cooked well so they can be eaten directly without additional cooking,” she said.

Intania also said the House of Sausage’s products are different from those that use fat, innards or synthetic material as casings; instead, the restaurant uses seaweed as an edible, outer wrapper. Customers thus need not remove the casing prior to cooking or eating the sausage.

As with most sausages sold here, the sausages ala House of Sausage is made from beef, combined with a variety of spices. This process of making homemade sausage is one production technique used to preserve the meat.

The word “sausage” has its roots in the Latin salsus, meaning salt, which referred to cuts or pieces of meat that had been preserved by the salting method.

According to Intania, sausages have long been popular among the Indonesian public, and her company was keen to raise the status of the sausage as a culinary icon of Bandung. It also wanted to educate consumers on the sausage as a healthy, suitable food.

Daniel Tjahjadi, operations manager at the House of Sausage, said they offered customers two choices — either uncooked sausages to take home or sausages prepared by the two top chefs at the restaurant.

Juariah, 34, a mother of two from Tamansari, Bandung, said she was satisfied with the sausages she bought at the restaurant.

“The meat was tender and clearly made from meat, with only a little flour.” she said. “When we buy sausages, we grill or fry them at home, and these sausages don’t shrink or shrivel, or get ‘dented’ as the Sundanese say.”

She was also certain that the sausages she bought at the House of Sausage did not contain artificial coloring, because when they were mixed into a vegetable soup, the broth did not turn red.

Daniel said the restaurant offered at least three meals that use sausages as its main ingredient.

The Just Sausage contains three grilled sausages served with the House of Sausage sauce, made from a secret recipe. The other two are the Hash Brown Sausage and the Garlic Sausage.

It is a pity that the restaurant’s menu has not yet explored a variety of sausage dishes to offer to its guests. So far, only seven of the 40 items on the menu are made from sausages.

When asked about any other specifications, Daniel said, “We’ve only just opened, and the restaurant runs from Fridays to Sundays, and on public holidays.

“As for our uncooked sausages, they are available every day.”