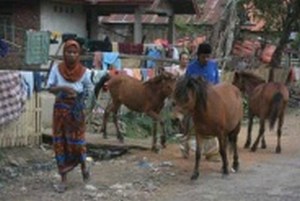 Spurred by the Dompu regency administration, sales from miracle-working horse milk, and an increase in tourism have helped raise living standards for the people of Sumbawa Island, West Nusa Tenggara. Sumbawa Island is well known for its horses, descendants of the legendary Mongolian animals and also of Chinese stock. Though small in size, they are often used to pull cidomo carts, a popular form of transportation on the island, for racing and, rather unexpectedly, for their milk — which cures cancer. Residents, especially those who work in milk production centers in Sumbawa, Dompu and Bima regencies, raise the horses in the wild.

Saneo village, around 10 km from Dompu’s downtown is home to one such production center, where the Dompu regency administration assists horse farmers in their work according to Panca Nugraha.

“Wild horse milk is not derived from wild horses that are caught and kept in captivity. They are tame to their owners, but are raised in the wild. They forage in the forest.” Saneo village chief Junaiddin said.

Horse farmers in Saneo have formed a horse farmers’ group called Mori Sama (living side by side), which has 50 members now. They raise more than 200 horses in Saneo, with around 30 used for milk production, producing an average of 60 to 80 bottles daily.

Wild horse milk is somewhat astringent and sour to the taste, unlike that of cow or buffalo. It can, however, keep for four months, provided it is stored at a cool temperature. Its restorative power purportedly enhances after two months.

The Dompu regency administration has initiated an assistance program to help farmers in the milk production process.

“The local administration has assisted us in packaging the milk since 2004. Milk is packaged and sealed as soon as it’s milked to maintain its freshness,” said Junaiddin.

Dompu regency administration spokesman Wahyuddin said the Bogor Dairy Product Analysis Center tested the milk in 2004 and found that it could cure intestinal infection, stomach cancer and was capable of fighting bacterial growth.

“The analysis showed that only wild horses from Dompu and Sumbawa still have high contents of antibiotics, likely due to their eating patterns in the forest and a specific tree worm they eat,” said Wahyuddin.

Following an increase in demand since the finding in 2004, the Dompu regency administration has designated two villages as production centers for wild horse milk — Saneo, Woja district, and Taropo village, Kilo district — to curb the sale of adulterated milk, produced by mixing the milk with water, preservatives, or milk derived from domesticated horses.

According to Wahyuddin, wild horse farmers in Saneo have often been invited to various exhibitions across the country to share their experience with horse farmers from other provinces.

Besides earnings from milk sales, Saneo’s community, made up of 400 families, or 1,800 people, has benefited from a surge in foreign and domestic visitors.

Proceeds from the milk have considerably improved the living standards of the villagers, most of whom are farmers.

“We can use the money from our crops to buy food and use proceeds from wild horse milk for other needs, such as paying for our children’s education,” said wild horse farmer Arifin.

Dompu regency is situated on Sumbawa Island, a ten hour drive from Mararam city. The journey includes a ferry ride across the Alas Strait from Kayangan on Lombok Island to Poto Tano in West Sumbawa. Dompu is located between Sumbawa and Bima regencies.