Helping the Reefs of Bali

The wide diversity of corals and marine life in Indonesia, the varied shapes and the vibrant colours of the coral reefs around the islands make diving in these waters a once in a life time experience. It is estimated there are around four thousand species of fish in the waters on Indonesia which constitutes roughly one fourth of the total fish found worldwide. The diving spots in Bali offer superb experiences. Just a few years ago, the lush coral reefs off Bali were dying out, bleached by rising temperatures, blasted by dynamite fishing, and poisoned by cyanide. Now they are coming back, thanks to an unlikely remedy: electricity.

Pemuteran Bay reefs off Bali’s north-western shore were under serious assault by 1998, victims of rising temperatures and impoverished islanders’ aggressive fishing methods, which included stunning fish with cyanide poison and scooping them up with nets. Now, the coral is thriving on dozens of metal structures submerged in the bay and fed by cables that send low-voltage electricity, which conservationists say is reviving it and spurring the growth. As thousands of delegates, experts, and activists debate climate at a conference that opened this week on Bali, the coral restoration project illustrates the creative ways scientists are trying to fight the ill-effects of global warming. 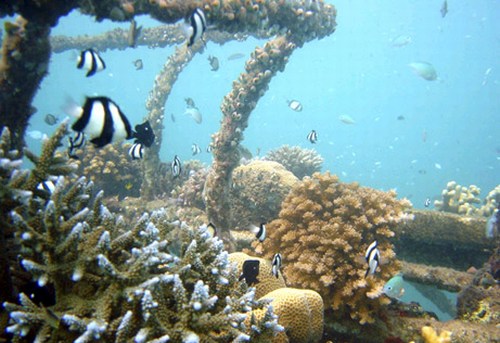