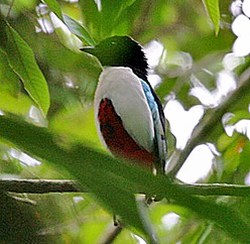 Halmahera fairy birds — Wallace’s Standardwing Bird of Paradise, Semioptera Wallacei — danced beautifully in the sky above White Land Hill on Halmahera Island, North Maluku, that morning before sunrise. With dark green feathers and silky white wings, the endemic birds of North Maluku were flying low through the forest while singing their morning song. Since their discovery by English adventurer Alfred Russel Wallace in the 19th century, fairy birds have long been dubbed as the most beautiful bird on the remote island of Halmahera (a haven for native flora and fauna), and one of the most famous birds in Indonesia. According to a survey conducted by Birdlife Indonesia, between 1994 and 1995, the population of Wallace’s Standardwing Birds of Paradise stood at between 75 and 124 and was distributed throughout Aketajawe National Park in Central Halmahera, Lolobata National Park in East Halmahera, Tidore city and White Land Hill in Sindangoli, around a five-hour ride from Aketajawe.

Among these locations, White Land Hill is the favorite spot for fairy bird watching. It was discovered by Demianus Bagali (a.k.a Anu) in 2004.

Anu, native to West Halmahera, said there were 15 fairy birds to see at White Land Hill, which also has rich mineral resources according to Lilian Budianto.

Male fairy birds usually begin their “display,” chirping and flying around at 5:30 in the morning, and stop at around 7 a.m., 45-year-old Anu said.

These birds are males, attempting to attract females to mate, he said.

“The male birds have to compete with each other to mate,” Anu said, adding that there were 12 males and three females in the White Land Hill group.

The rare bird with its distinctive white strands would perch momentarily after maneuvering through the air, allowing observers to see their brilliant plumage through binoculars. We only saw six fairy birds that morning.

Sometimes, Anu said, the birds would all perch on the same branch.

“But such a ‘meeting’ is very rare,” said Anu, who learned ornithology from Australian bird researcher David Bishop when he accompanied him on a research project in the 1980s.

Besides Halmahera fairy birds, observers could also see many other birds at White Land Hill, including Eulipoa Wallacei.

These birds, however, are unlikely to remain at White Land Hill, with announcements their habitat will soon become a site for mining exploration.

Anu said the local government were set to issue a permit for a foreign mining company to explore White Land Hill, which is famous for its white stone. White stone is used as a basic material for cement, ceramics and paint.

Anu said mining could start next month because the mining company had already secured the area.

To obtain the permit, the company had not encountered many obstacles because the local community had not made any protests or put pressure on the government or investors.

“Local people gave up the land because they thought they would lose it anyway. We have no proof we own White Land Hill even though we have cultivated it for many generations,” Anu said.

Anu has repeatedly approached local authorities, asking them to re-consider their decision to give concession rights to the mining company, because its activities would destroy the Halmahera fairy bird habitat.

So far, however, Anu has failed to convince the government or the local community of the need to save the land.

“The Halmahera Fairies will move to another place if their habitat is destroyed,” said Anu, who was planning to move to Lolobata if he can no longer accompany observers to watch birds at White Land Hill.

“The mining company may bring small profits to some local people, but the government must make sure their activities don’t permanently destroy the birds’ habitat or the rest of the local environment,” he said.

He suggested the government review its policy on mining.
Birdlife deputy chairman Effendy A. Sumardja said his organization would fight to get more wilderness areas protected.

“Mining companies are not allowed to touch protected forests, and this is one way to protect our environment,” he said.

Birdlife was previously involved in the reclassification of the Aketajawe and Lolobata forests, making them ‘protected’, and hopes to increase conservation areas.

Forestry Ministry directorate general Darori who was visiting Halmahera at the same time, conducting field research, said he would review the expansion of Aketajawe and Lolobata National Parks.

“If our study suggests White Land Hill should be included in the existing Aketajawe National Park, the mining permit could be revoked,” he said.

Halmahera Island is located in eastern Indonesia between Sulawesi and Papua Islands. Situated between the Asian and Australasia-Papuan regions, Halmahera boasts unique fauna and flora not found anywhere else in the world.

Other such unique habitats, including Sulawesi and Nusa Tenggara, were mapped out by Wallace with an imaginary line through three regions, which later became known as the Wallacean area. The Halmahera fairy birds (Semioptera Wallacei) are among 249 birds endemic to the Wallacean area.