The Dieng Plateau is a mystically haunting area 26 kilometres north of Wonosobo in Central Java. This is where you will find the oldest temples on Java in a sacred area of mountains and enchanting scenery. The name ‘Dieng’ comes from the words Di Hyang which means ‘Abode of the Gods’.

All the temples in the are named after Wayang. The now soggy and musty plateau was once a volcano that subsequently erupted and all that remains is a crumbling caldera. There is debate over who actually built the temples on the plateau. Some scholars profess that it was built by the Saliendras, whilst others, Sanjaya – both powerful dynasties.

Although Dieng is home to 8th Century Hindu temples, there is also a unique haircutting ritual performed there as Suherdjoko reports:

The sound of gamelan music reverberated over the Dieng Plateau, as hundreds of villagers and visitors flocked to a site in the woods where offerings had been arranged on the grounds of an exotic holiday resort.

The strong scent of burning incense, the gamelan music and the solemnly sung Javanese songs created a magical atmosphere not just at the site, but also in the hearts of the people attending the ritual.

A senior villager then called out the name of a five-year-old girl. Accompanied by her parents, the girl was seated in a prepared chair. A minute later a few villagers in traditional Javanese costumes began cutting the girl’s hair, after saying prayers in a mixture of Javanese and Arabic.

After one child was finished, another was brought forward. In all, eight children had their hair cut.

The villagers in charge of cutting the hair only cut one, tangled lock from each child’s head. 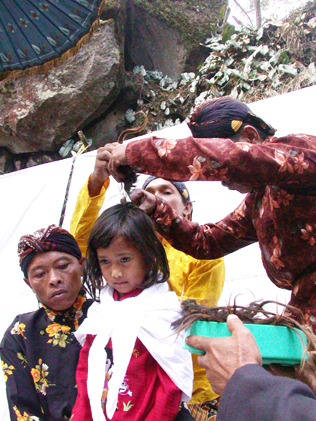 Locals call curly hair rambut gembel, and believe that children with such hair are the “chosen ones”. They also believe that unless the ritual is held to cut the unwanted hair, they will never been able to get rid of the tangled hair.

Shampooing and combing only help, so say the people on the plateau.

“Other people may not believe so, but we here believe that only through this ritual will we be able to get rid of the tangled hair for good,” said Budi Suroyo, whose son Sigit Adi Suroyso has tangled hair.

Sigit is a normal, healthy looking boy. Only is hair is tangled, especially on the back of his head. “I’ve tried shampooing it, but it remains gembel (tangled). However, I’m proud because he is a chosen child. He has been chosen by Kyai Kaladete,” Budi said.

Budi was referring to a figure that is believed to be the ancestor of people in the region. Kyai Kaladete is thought to be the first inhabitant of the region, although no one is able to say exactly when he lived.

Kyai Kaladete, according to the myth, had tangled hair. His hair caused him so much suffering, he left behind his tangled hair when he died so his ancestors would be able to share his suffering.

Children with tangled hair, according to Budi, indeed experience the same suffering as Kyai Kaladete. That’s why the haircutting ritual must be performed, to ensure the children do not suffer bad luck in the future.

Before the ritual, each of the children is required to request a specific item that will be used in the ritual. Unless the parents fulfill the request, the child will not be allowed to take part in the ritual.

Some of the requests are easy, others more difficult. Rahayu, 5, for example, asked for a rooster and Rp 2,000. The rooster and money, which accompanied her during the ritual, were given to her after the ritual.

Tri Lestari, 5, asked for boiled quail eggs and chicken, while Dina Setiana asked for ice cream. But one father will have a hard time meeting the request of his son, who wants an airplane.

“That’s impossible for us. We cannot afford it,” said Purwanto, adding that he would persuade his son to request something else for the next ritual.

Once, according to Budi, a child’s tangled hair was cut without holding the ritual. As a consequence, he said, the child had suffered poor health ever since, including a seemingly unhealable scab on his head.

Luckily, someone realized the cause of the child’s poor health and suggested the parents ask for mercy at Kyai Kaladete’s retreat on Gunung Kendil.

“It turned out to be very simple. Some soil from the retreat was rubbed on the scab and it was healed,” Budi said.

The haircutting ritual itself usually begins with a procession from Arjuna Temple on the Dieng Plateau to the prepared site.

Accompanied by various traditional performances, the children whose tangled hair is to be cut are then taken to Semar Cave, a meditation site, to ask for God’s blessings.

All the cut tangled hair is then collected and floated on the nearby lake, called Telaga Warna. That marks the end of the ritual.

Back at the ritual site in the woods, people compete to grab some of the food offerings. The end of the ritual is a time for a little party as people enjoy all the food presented as offerings.

Tourists, both local and foreign, enjoy the ritual, which has been included on the region’s calendar of events managed by the two neighboring regencies of Wonosobo and Banjarnegara.

Located some 26 kilometers north of Wonosobo, the Dieng Plateau is administered by the two regencies. It has long been known as an exotic holiday resort offering beautiful scenery, historical sites, mostly Hindu temples from the eighth century, craters, natural hot water springs, lakes and cool weather.