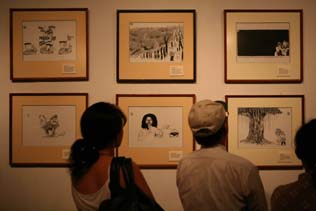 An anxious-looking woman turns to the left and right, walking barefoot in the dark while holding her shoes in her hand.

A wolf-headed man wearing a suit and a tie stalks her. His mouth opens, showing his sharp teeth.

The woman has a handbag with the word HAM (human rights) printed on it, while the word PERDA (bylaw) is written on the sleeve of the man’s suit.

This is a cartoon created by GM Sudarta to criticize the 2005 bylaw on prostitution issued by the Tangerang administration, which allows the authorities to arrest women suspected of being prostitutes. The bylaw has enraged human rights activists, as any woman walking alone at night could be arrested.

Sudarta, a cartoonist with Kompas daily, is putting 40 years of his work on display at Bentara Budaya, Jl. Palmerah Selatan 17, Central Jakarta, from July 4-12.

A book, 40 years of Oom Pasikom, was launched at the opening of the event.

Oom Pasikom is the main character in Sudarta’s cartoons, which were the basis for a movie starring Didi Petet in 1990 and a TV series in 2004, starring Butet Kertaredjasa.

Watching the exhibition is like taking a walk through the country’s history. But while history books can sometimes be dry, the cartoons are lively and often humorous despite their often serious messages.

The first cartoon on display, published in Kompas in 1967, shows the New Order’s euphoria. Soon after replacing the country’s first president Sukarno, Soeharto and his New Order wiped away everything from the old regime.

The cartoon shows Soeharto in his military uniform holding a broom to sweep away “vested interest” (Old Order) and “sisa orla” (the remnants of the Old Order).

In the same year, Soeharto set up the Corruption Eradication Team (TPK) to combat corruption. Fighting corruption, however, proved quite difficult.

In 1968 Kompas published a cartoon by Sudarta on the anti-corruption team, which was having trouble proving the crime even though many government officials had allegedly abused their power to accumulate wealth.

“There is no proof in black on white.” These words are written on the shadow of a fat man in a suit with symbols of currency on his stomach, who laughs ecstatically while several members of the anti-corruption team look on confused. One of them holds a thick book (of laws) and scratches his head.

Thirty years later, not long after Soeharto was forced to step down, Sudarta drew a cartoon about Attorney General Andi M. Ghalib who tried to question the former president over alleged corruption.

Ghalib, sitting on the floor with his knees bent and folded to one side, politely asks Soeharto, who sits comfortably in a chair:

“Excuse me, where is your majesty’s wealth and where does it come from?”

This cartoon was followed by another one after the South Jakarta District Court decided that it could not try Soeharto due to his health problems.

Years after Soeharto’s downfall, the issue of corruption lingers even though the government has established another anti-corruption team, called the KPK or the Corruption Eradication Commission.

In 2005 the artist showed how difficult it was for the KPK to fight corruption, which has become ingrained in much of Indonesia, including the legal system.

In the dark, a member of the commission is trying to investigate a corruption case. He turns on his flashlight, directing the beam of light toward the ground to see a footprint with the word “corruption” in it. Three figures, a judge, a prosecutor and a policeman, stand nearby, doing nothing even though each of them also has a flashlight in his hand.

An ordinary man is seen waving his hand and saying: “Please turn on your light, sir.”

It is clear that Sudarta, who is also a painter, does not draw his cartoons just for fun. Many of his works reflect bitterness, sadness and anger, such as the one about the 1998 May riots or the piece about the bombing in front of the Australian Embassy in 2004, which happened after a blast at the JW Marriott Hotel in Jakarta and the Bali bombings.

Born to a poor family in the small town of Klaten, Central Java, Sudarta is greatly concerned by the injustice he sees in the country.

This includes the 1970’s unsolved rape case of egg vendor Sum Kuning in Yogyakarta, which allegedly involved the son of a government official, while the press could not reveal the truth.

The murder of labor activist Marsinah in 1994 and the murder of human rights activist Munir Said Thalib, who was found dead on a Garuda flight to Amsterdam in 2004.

His concern regarding the poor performance of the Indonesia Soccer Association was reflected in a 1977 cartoon showing a player whose mouth is gagged with a ball, while Oom Pasikom holds his hand, seeking help, shouting: “Doctor ….”

His cartoons are informative, loaded with sharp and witty criticism, and also entertaining. No wonder he has received many awards, including several Adinegoro Journalistic Awards (in the 1980s), the Best Cartoon of Nippon (2000) and Gold Prize Tokyo No Kai (2004).

The exhibition will later move to Yogyakarta, Malang, Surabaya, Denpasar, Semarang and Bandung.