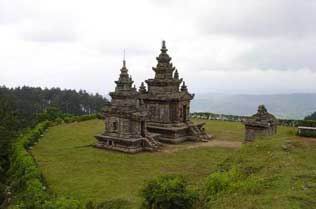 Central Java is rich with the cultural heritage of Hindu, Buddhist and Islamic historical eras. The famous Buddhist temples — or candi — of Borobudur, Mendut and Pawon, and the Hindu temple Prambanan are a few of the numerous cultural influences that spread through the province.

Aside from these famed temples are other, lesser-known temples such as Sewu, Kraton Boko, Sambi Sari, Sari, Kalasan and Plaosan.

Some of these temples are located on a mountain slope or on a plateau: the Dieng temples on Dieng Plateau, the Sukuh and Cetho temples on Mount Lawu, and the Gedong Sanga temples on Mt. Ungaran.

If you are both a culture and nature lover, then the Gedong Sanga temples might be an ideal choice for an outing.

The Candi Gedong Sanga complex is located at Candi village of Ambarawa district in Semarang regency, 25 kilometers from Ungaran or 45 km from Semarang, the provincial capital.

The complex is easily accessible from either Yogyakarta (about 2 hours by car, or 3 hours by bus) or Semarang. The roads are paved and smooth — except for the one linking Ambarawa to the complex, which is steep and rather narrow.

Near the complex is a traditional market, Pasar Bandungan, and on market days the street might become congested, so drivers must be alert — from Pasar Bandungan, it is still 4 km to the temples.

The Gedong Sanga temple complex, discovered by Sir Stamford Raffles in 1804, was built during the 9th-century Syailendra Dynasty. The temples are situated at about 1,200 meters above sea level and are scattered within a pine forest.

The local temperature ranges between 19-27 degrees Centigrade. A number of sulfur springs exist inside the complex, where simple bathing facilities are available — at a small fee — for those wanting to bathe or wade in the hot water. It is said the sulfur hot springs can cure minor dermatological ailments.
Facing south from the slope of Mt. Ungaran are Rawa Pening Lake, Mt. Merbabu and Mt. Merapi, while to the west are Mt. Sumbing and Mt. Sindoro.

A complete trip through the complex is roughly a 2-km hike. The journey, which ascends and descends through groves of pine trees, ravines and sulfur springs, surely requires a good deal of energy.

Luckily, horses are available for rent at the entrance to the complex. Be sure to get a fair price: approximately Rp 50,000 per horse. When the deal is made, just climb on to the horse and enjoy the panorama while its owner guides the way, rein in hand. Visitors may dismount during the trip to observe the temples at their leisure.

A variety of accommodation are available along the ascending road to the temple complex, at some 3 km from the temples. Among them are the Amanda, Gaya and Rawa Pening hotels, whose rates range from Rp 200,000 for a single to Rp 900,000 for a three-bedroom villa. The rates may increase 30 percent over weekends and public holidays.

Legend has it that Queen Simha of the Kalingga Kingdom was in power when the Gedong Sanga complex was built. She was known for her fair and respectable reign.

The Queen taught her people to worship Sang Hyang Widi, the Powerful God, and in order to accomplish this, she ordered that a temple devoted to Sang Hyang Widi be built.

According to the belief, human beings must be able to control their desires to live a peaceful life. The desires were said to come from the nine orifices of the body, called Babahan Hawa Sanga in Javanese. The erection of the Candi Gedong Sanga could be thus considered a symbol of controlling these origins of desire.