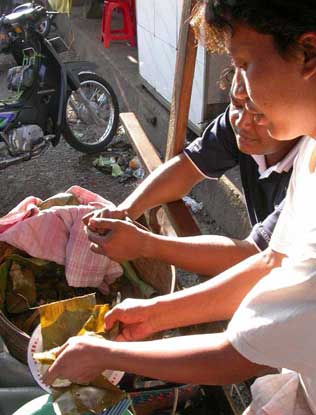 A tour through the Tawangmangu forest reserve in Karanganyar, Central Java, will not be complete without savoring the favorite dish of the Lawu slope, nasi geblok, which is only found at Tawangmangu Market, about a kilometer from the tourist spot.

A popular traditional food since the 1970s, the aromatic geblok is piquant rice wrapped in banana leaves.

“This eatery was set up by my mother in the ’70s,” said Samino, 37, the second-generation proprietor of the geblok food stall.

This regional specialty is made from half-cooked rice, which is then mixed with boiled coconut milk. To enhance its aroma, salam (laurel leaves) and pandan (screw pine) leaves are added.

“After stirring, the rice mixture is wrapped in banana leaves and steamed for 1.5 hours,” Samino said.

According to Samino, the piquancy of the rice derives from the pure coconut milk while the aroma originates from the natural fragrance of the leaves. The dish does not use any chemical flavoring.

Geblok is even more delicious when eaten with gadon, sliced beef steamed with shredded young coconut, a long-time favorite, and bothok, a condiment of steamed young red onions with minced chili.

To make gadon, the beef-coconut mixture is steamed for three hours to make the meat tender.

“Bothok has a very typical and exotic taste,” said Beny, 32, a tourist who was enjoying the rice dish.

The tasty rice dish — combined with the spicy chili-onion condiment and a small piece of seasoned beef — arouses most everyone’s appetite.

Adhi Soepo, 54, a Yogyakarta resident whose child lives in Tawangmangu, claims he has always tried to find enough time for dinner when visiting the area.

“It’s one of my family gathering places. The whole family will dine here when I visit my grandchildren. The rice with the onion can be found nowhere else,” he said.

“I crave geblok back home, so I’ll have it bought and sent to Yogyakarta by my other child when they visit. Though simple, the dish makes one yearn for more after trying it once,” said Adhi.

Samino said that his mother, Saginem, was the first to open the geblok stall at Tawangmangu Market to provide food for local vendors from midnight to 3 a.m.

“Vegetable sellers, who are mostly busy in the small hours, ate the dish,” recalled Samino, who has taken over these three years following his mother’s death.

“It’s practical for busy people, because the rice is not served with soup — and the recipe is still the same today,” he said. One change, however, is that the eatery is now open only four hours, starting from 3 p.m.

“We have to close at seven in the evening, but we’re almost always sold out,” said Samino.

The stall where he runs the geblok eatery is used by vegetable vendors at night and banana sellers have their turn in the morning.

“We are all making a living here so we maintain tolerance,” Samino said.

Tawangmangu has three food stalls serving geblok. One, set up only three years ago, operates from morning to noon, and another located in the center of the market opens at midnight.

“Our stall is the oldest. We open by turns for equal gain,” Samino remarked.

The dish is quite cheap and thus affordable for most people. The rice, gadon and bothok each costs Rp 300 per serving, and the father of two said a customer typically has two helpings of rice, one portion of gadon and one of bothok — a grand total of Rp 1,200.

Samino cooks 3.5 kg of rice to produce 130 packets of geblok daily. Although visitors have been disappointed when the rice has run out, Samino has never increased the volume.

“I’m lucky, and we have to share the gain with the others,” he said.