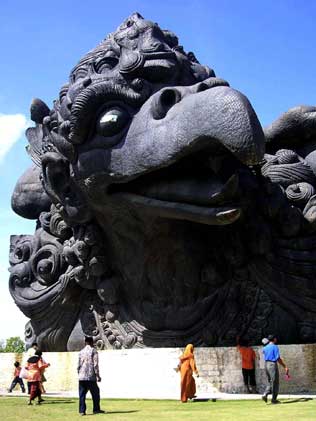 The 50 or so visitors milling around the 20-hectare Garuda Winsu Kencana cultural park in Jimbaran looked small in comparison to their surroundings.

“It’s like visiting a cemetery,” said a young girl watching the sunset from the park, which sits on a hill south of Denpasar.

The beautiful and serene park, overlooking Jimbaran Bay, was originally meant to be the best cultural park in Indonesia, and maybe, one day, the world.

But now it is just another remnant of the New Order regime, part of an ambition to build world-class landmarks to compete with iconic structures like the Statue of Liberty in New York.

Under the auspices of Soeharto, local artist I Nyoman Nuarta was commissioned to create a huge statue of Wisnu, the god of creation, sitting on Garuda, the mythical bird that carries him, with a final height greater than that of the Statue of Liberty.

The park was also to be equipped with a performance center with 7,500 seats, and ampitheather, a street theater, galleries, restaurants and other artistic attractions.

Problems began to emerge almost as soon as construction started in 1997, with the budget ballooning to hundreds of billions of rupiah.

The park was initially the idea of the Garuda Wisnu Kencana Foundation, a grouping that included then minister of tourism and telecommunications Joop Ave, then mining and energy minister IB Sudjana, along with Nuarta and several other influential individuals and businessmen close to Soeharto.

It was to be built in the rocky and hilly area of Jimbaran, which present new logistical problems. The hills had to be cut flat to create the area required for the statue, which is still not finished today. Only the head and torso of Wisnu have been completed.

Land clearing was also an early problem. A 250-hectare plot of land, 100 hectares of which belonged to Badung regency, and the rest to residents, was required. Ten years later, there are still disputes over the matter.

“The clearing program with the local residents has not yet been solved properly,” said Anak Agung Ngurah Rai Riauadi, the park’s public relations manager.

Management of the park’s construction was not effective because so many people shared their ideas and wanted to see them put in place, “which were of course very difficult to accommodate,” he added.

The monetary, social and political crises between l997 and l998 worsened the situation. The fall of the Soeharto administration badly affected the project badly.

Today, only 20 percent of the original project has been completed, and construction was halted entirely in September 2004.

“I promise to you that we will finish the project. It is the pride of the nation,” the President said in a speech.

I Made Mangku Pastika, former head of the Bali Police, was then appointed chairman of the foundation, while Edi Sukamto, owner of the Kuta Galeria Shopping center, was made the park’s director.

“We will continue building the park in May 2008 to commemorate National Awakening Day,” said Mangku Pastika.

However, money will always be a lingering problem for the project. Only a very few investors are eager to invest in cultural projects.

“It is very sad to enter an empty gallery with no art objects and visitors,” said Anna, a visitor and art student.