Frog without Lungs Discovered in Kalimantan 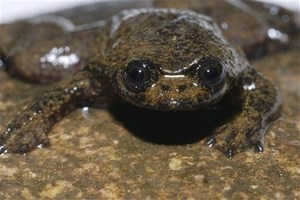 A frog has been found in a remote part of Indonesia that has no lungs and breathes through its skin, a discovery that researchers said could provide insight into what drives evolution in certain species. The species is the first frog known to science without lungs and joins a short list of amphibians with this unusual trait, including a few species of salamanders and a wormlike creature known as a caecilian. The aquatic frog Barbourula kalimantanensis was found in a remote part of Indonesia’s Kalimantan province on Borneo island during an expedition in August 2007.