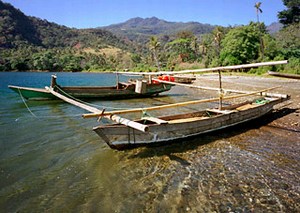 Lying between Sumbawa and Timor islands is Flores, one of the Lesser Sunda Islands in East Nusa Tenggara. Maumere is the largest town. The island was favoured by Portuguese sailors in the 17th century as an identity marker for the cape on the eastern end of the island. Flores is divided by mountainous and volcanoes and has diverse ethnic groups each with their own traditions and languages. Catholicism is the predominant religion. Interestingly, traditional belief system and ritual practices are still prominent in daily life irregardless of the domination of Catholicism and these include the renewal of symbols of group identity and of course those of the annual agricultural calendar in life-cycle rites.

The dormant volcanoes include Kelimutu, Egon, Ilimuda, Leroboleng, and Lewotobi. The west coast of Flores is one of the few places, beside Komodo Island where the Komodo dragon can be found in the wild. Endemic to the island is the Flores Giant Rat. It was the Portuguese traders and missionaries who first came to Flores in the 16th century and mainly to Larantuka and Sikka. 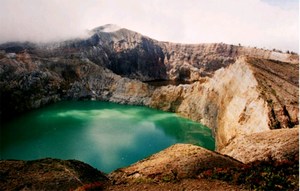 Flores has numerous unique attractions and the main one being Mount Kelimutu with its three crater lakes of different colours. Tiwu Ata Mbupu (Lake of Old People) is usually blue and is the westernmost of the three lakes. The other two lakes, Tiwu Nuwa Muri Koo Fai (Lake of Young Men and Maidens) and Tiwu Ata Polo (Bewitched or Enchanted Lake) are separated by a shared crater wall and are typically green or red in color, respectively. The crater lakes are in the caldera of a volcano, and fed by a volcanic gas source thus resulting in highly acidic water. The lakes change colours on an irregular basis and this depends on the oxidation state of the lake from bright red through green and blue.

The greatest attraction, however, is the diving in the Flores Islands. The famous ‘sea gardens’, as they are known, extend along most of the northern coastline. There is excellent snorkelling and diving along the north coast of Flores and most notably Maumere and Riung where you will find white sandy beach of Pulau Rutong.

Head down to the mangrove trees and check out the massive bat colony hanging there!. Labuanbajo, on the western tip of Flores, is a town frequented by tourists and it is from here you can visit Komodo and Rinca. Labuanbajo is a haven for scuba divers as the giants of the deep, whale sharks, inhabit these waters around Labuanbajo.

Other tourists include Luba and Bena villages where you can see traditional Flores houses and Larantuka renowned for its Holy Week festivals.

Or, if you are in to hiking then a visit to Cunka Wulang Canyon is a must. It’s a one-day trip from Labuan Bajo in West Flores and the canyon is 30 km east of there and takes about four hours. The place is like a magical kingdom with a rainforest setting and huge cascading waterfalls. You can take a dip in the cool water or just chill-out to your heart’s content. Liang Rodak limestone caves are another 60 minutes from the cascades.

And, if you are in to Herpetology then the snake cave is for you. Named “Istana Ular”, the place lies in the hinterlands of West Flores. Here you will find a large number of pythons and bats.