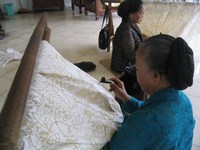 It was only the other day I was admiring the various pieces of batik that I had appropriated over the many years of travelling in the archipelago and in particular those pieces from Java. The motifs, superb in their design whether it be that of geometric forms or those that have a natural significance such as flowers, leaf buds, butterflies, insects or fish are renowned the world over. Indonesian textiles are in big demand worldwide and outside of Asia, the cloth is gaining a reputation as a fashion form. Batik truly is the fabled cloth of Java. Surrounding this cloth are legends steeped in history and mysterious. Batik is art in the purest sense of the word. Batik is a reflection of Javanese culture with its diversity of patterns, colours and textures.

There are basically two types of batik you can purchase – the printed or batik cap, and batik tulis where the patterns are dyed into the cloth are drawn with a canting. If you are after quality batik then the latter is the best to purchase. There are numerous cities and towns across Java that produce their own unique pattern or design and here are five of them.

Yogyakarta: Located in Central Java and renowned as the cultural heart of the island, their designs are numerous and the city is famous for its textile production. The predominant colours are brown, indigo and white. One of the most beautiful pieces of batik are those with the grompol motif and is distinctively a Yogya design. Used mainly for weddings and ceremonies, the pattern symbolises the coming together of all goods things, such as luck, happiness, children, and harmonious married life. Yogyakarta is also well known for batik paintings all of which you will find along Jalan Malioboro, Beringharjo Markets and in the numerous batik galleries spread out across the city.

Surakarta (Solo): Located sixty kilometres to the east of Yogyakarta, the ancient city of Surakarta has one of the finest batik markets on the island – Pasar Klewer. The batik of Surakarta is rich in creams and browns with tinges of yellowish gold. Of particular note are the stunning floral and bird designs, worthy of hanging on your wall to be admired! Surakarta is city of long-standing in batik production and many buyers prefer to buy their batik here than in Yogyakarta. The peculiar local style of batik is solo malam, bright colours against a black background. There are a few places in Surakarta where you can learn the art in batik courses.

Pekalongan: The town has always played a leading role in the production of batik on the island and also in the development of modern batik design. The batik produced here is absolutely stunning with the use of bright bold colours and natural figures being prominent such as red and blue birds and flowers on pink or white backgrounds. The batik is soft both in texture and design and has prices to match its beauty. There are numerous batik factories in Pekalongan and it worth visiting a few of them to give you insight into the production.

Cirebon: Located on the northern coast of Java,Cirebon’s batik is known as Kencana Ungu and is a batik made of finely woven cotton. Because of the large indigenous Chinese population, the motifs found in their batik are predominately Chinese in origin. Motifs include tigers, dragons, elephants and lions. As with most Chinese paintings, the ubiquitous rocks and clouds can also be found in their batik design and this batik form has eight colours. Interestingly, Cirebon was known as the few places where females did not draw the patterns on the batik before waxing occurred. Subsequently, the masculine and bold forms representing wide open spaces are prominent.

Madura: An island off the north-east coast of Java, Madura is renowned for its bull races but, also produces some fine pieces of batik known as Batik Madura and characterised by motifs of flowers and birds, with hints of Chinese art. The rich, bold mengkudu red, reddish browns or indigo colours have motifs of winged naga snakes, winged horses with fishtails, sharks and other strange animals. These ornaments taken from sea creatures are a reflection of the fishing profession. You will also find the influence of the northern Java coastal motifs such as flowers and birds. The Mataram Kingdom once had its power to this area and this influence can also be seen in batik Madura. 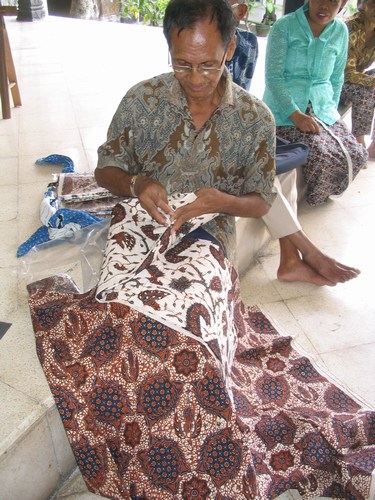