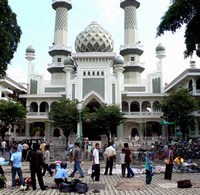 When you travel across Java there are many beautiful cities and large towns but none are as cool and delightful to walk around as the second largest city in East Java, Malang. Famous for its cool air and the surrounding country regions, the city was commonly referred to as ‘Paris Van East Java’ because of its quaintness and magnificent colonial buildings dating from the era of Dutch colonization and was very popular with European residents during this time. The streets are wide with an airy feeling, the people of Malang accommodating and friendly, however, it is less visited by foreign travellers there days. It is one place that, in my opinion every traveller should put on his ‘must visit’ list as the array of attractions, excellent restaurants and delicious food is quite simply, beyond reproach as far as what a Javanese city has to offer. There is so much to see and do and especially in the countryside where places like Tumpang, Turen, Batu and Singosari offer nature at its best. Then there are the beautiful beaches such as Sendang Biru Beach, Ngliyep Beach, and Balekambang Beach.

As a centre of tourism, Malang has various places of interest including traditional dance performances. There is so much to see and here are just a few of my suggested places to visit:

Besides those mentioned above, you cannot go past visiting some of these places:

All of the above are natural attractions and each place warrants a fair bit of time spent in each. The panoramas are magnificent and a photographers delight. Malang is also famous for being the centre of religious education. This is evident with the existence of many Islamic schools (pesantren) there, and, Malang is also home to a thriving transgender (waria) community.