Expanding the Forest for the Environment: Padang Tegal, Bali 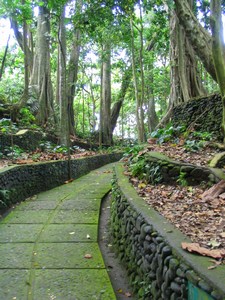 The usually quiet Monkey Forest turned into a bustling field of activity on Sunday morning as the people of Padang Tegal celebrated the launching of the Tree Adoption Program, aimed at expanding the area into arguably the largest community-managed forest in the island. The customary village of Padang Tegal comprises four banjar (traditional neighborhood organizations) with more than 2,600 residents and is the traditional custodian of the Monkey Forest, more than eleven hectares of woods to the south of Ubud. Visitors consider the forest to be of Ubud’s main attractions. The locals, who prefer to call the forest Wanara Wana, view it as a sacred sanctuary according to I Wayan Juniartha.

“The important Dalem Agung Padang Tegal temple and a holy springs of Beji lie inside the forest. The monkeys that dwell in the forest have always been considered by the locals to be the servants of the gods. That’s the primary reason why the locals have always maintained and protected this sanctuary,” the bendesa (head) of Padang Tegal customary village, I Made Dana, said.

Behind him, children from various kindergatens in Ubud were sitting in small groups under rows of young trees.

Each of them tried to capture the beauty of the surrounding nature on a piece of drawing paper. Sitting leisurely on the grassy field, still a bit wet due to the previous night’s shower of rain, these children’s innocence accentuated the woods’ fresh natural beauty.

The drawing competition was part of Sunday’s program, appropriately titled “Save the Planet and the Sacred Monkey Forest Sanctuary“.

“Those young trees are the result of the reforestation program we carried out in 2003. Now, some of them are already six meters tall,” the forest’s promotion head Kadek Gunartha said.

Prior to 2003, the forest covered only seven hectares. But that year, the village assigned its young people to transform more than 3 hectares of village land south of the forest into wood.

“The reforestation and conservation activities have been carried out for years, but this year we realized the need for a better and wider promotional drive to inform the public at the regional and national levels of our efforts,” Gunartha said.

This year, the village took the program to a new level by allocating more than Rp 2 billion out of its own budget to purchase one hectare of privately owned land bordering the forest.

“We will turn that land into forest, an extension of the original forest. In the future we will make several similar purchases to ensure the existence of this sacred forest,” Made Dana said.

The move was simply extraordinary, particularly for the island, where villages generally spend billions of rupiah on religious rituals or renovating temples and not on environmental programs.

The expansion of the Monkey Forest, Gunartha explained, would serve several important purposes, the first of which was to provide a larger habitat for the forest’s growing monkey population.

A census carried on June 2007 at 25 sites in the forest found out that there are now 346 monkeys living in three different packs.

“The number is expected to increase, so they will need a larger area both for playing and feeding. Soon, the number of the packs will increase to four because we have observed a significant power struggle in a pack that occupies the eastern part of the forest,” I Dewa Gede Rai Putera, a physician responsible for the scientific aspects of the park’s management.

The second aim is to increase the number and variety of the trees in the forest. So far, the forest houses 163 species of plants. The management now plans to add more local and rare species to the forest.

One way to achieve that is the Tree Adoption Program, which was officially launched on Sunday morning. By contributing Rp 150,000 (US$16), a visitor can have a specific tree planted in the forest.

“The management will maintain and take care of the tree, and will issue a certificate acknowledging the visitor’s contribution to the program. The program is carried out in cooperation with the Gianyar chapter of the Indonesian Hotels and Restaurants Association (PHRI) and 58 visitors have agreed to join this scheme,” Gunartha said.

The program, he said, was an excellent carbon emissions offset option for those who wanted wipe out the carbon debt they had generated during their trip to Bali.

The third objective was to turn the forest into a center of environmental studies for the locals.

“The forest will be a field laboratory to increase the awareness of the locals on environmental issues,” Rai Putera said.

So far, the forest’s management has carried out several scientific cooperation activities with researchers from Bali and abroad, including Udayana University (Bali), the University of Alabama, Central Washington University and the University of Notre Dame. The results have been published in more than eleven scientific publications.

“These cooperations help us in understanding the monkeys’ behavior, thus, in minimalizing their aggressive attitudes and in providing them with the medical treatment they need. This research also confirms that the monkey populations are free from dangerous diseases, such as TB,” he said.

Next year, the management will construct a compost plant inside the forest to teach locals how to make environmentally friendly fertilizer.

The fourth objective is to provide residents with rare plants that are essential to the rituals of Balinese Hinduism.

“We must be able to sustain our religious tradition without having to inflict a damaging burden on the environment,” the bendesa said.

Around 200 meters to the north of the drawing competition site, hundreds of Padang Tegal youths were busy digging soil and planting trees in a large clearing. On a higher elevation, a Hindu high priest Ida Pedanda Gde Manuaba observed the activity with a smile on his face.

“This is the site of our Ritual Forest. Today, we are planting more than 20 species of ritual plants. We are still searching over the island for the other ritual plants,” the forest’s field manager I Wayan Selamet said.

When the activities ended on that bright Sunday morning, the people of Padang Tegal had added 700 more trees to their beloved sanctuary.

“The thing that really makes me proud is that everything has been done by our own people, including the management of this forest,” I Made Dana said.

The bendesa has a good reason to be proud. Not many village in Bali have that kind of environmental enthusiasm.