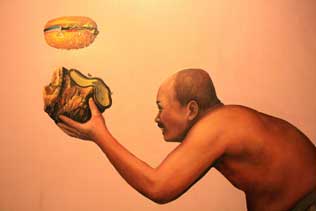 East Java artist Ivan Hariyanto and Jakarta-based artist Paul Hendro have long known and admired each other’s work. It seems fitting that Ivan and Paul’s first encounter with one another would take place at the opening night of their joint painting exhibition at Philo Art Space, titled Encounter.

“The title ‘Encounter‘ refers to the joining of two realist painters,” said Amalia Ahmad, co-owner of the gallery, noting the parallels between the two artists’ works.

Indeed, at first glance, it’s easy to see the stylistic similarities between the work of Ivan and Paul. Both painters eschew fanciful depictions in favor of more simple, un-idealized renditions of their subjects.

That’s not to say that their takes on realism lack creativity.

Ivan, the slightly surreal and more experimental of the two, has a knack for unconventional framing and boldly colored backgrounds.

One of his most playful pieces on display is Eddie Hara-Why Me? On a stark yellow background, what appears to be a self-portrait of Ivan is howling in pain as a surreal-looking fish, painted in the style of Eddie, bites his finger.

A different piece worth contemplating is the symbolic You Are My Hamburger. Another self-portrait of Ivan is framed against a light pink background, his figure hunched in a covetous pose while holding a rock, a hamburger floating above his hands.

Look closely and one can also spot a Salvador Dali-esque melted watch face splayed over the rock.

“The hamburger represents a joke, because a lot of people cannot afford things like hamburgers and Cokes,” said Ivan, 52. “The watch represents how fashion changes over time and that this hamburger is a trend.”

One thing that Ivan didn’t choose to elaborate on was a small American flag painted onto the hamburger, no doubt to signify its national origin and to denote some thinly veiled criticism.
What he did divulge was the inspiration for much of his work, which stems from a need to balance the barrage of technology and modernism with the traditional.

Works like The Traditional Dancer with The Woman are indicative of his vision, pairing a Western woman in modern dress with a dancer of seemingly Balinese origin, the latter appearing to push away the former.

“I cannot deny the uprising of media, the Internet or TV,” said Ivan, who has been painting for more than 30 years. That is why I mix the traditional with the modern. There must be a balance. You cannot be uprooted: You have to remember your culture.”
Whereas Ivan’s work is a bit more esoteric in symbolism, Paul prefers to lay things out at face value.

Pieces like Thanks, Daddy and Berangkat Subuh, Pulang Larut (Dawn departure, night return) illustrate an embracing of modern lifestyles and a simple air of positivism.

One would think that a deeper disparagement of affluent excess or technological detachment lay beneath the two works, but Paul countered, saying, “There are so many negative things in the news and the media. I just want to highlight the positive.”

But some of Paul’s work falls more on the surrealist side, which can be seen in the piece Tentang Tingkap2 Langit Yang Terbuka (open layers in the sky), which depicts a sky layered with open windows and money raining down through them. Paul explained of the painting, “If God gives you fortune, no one can stop it.”

Another example of Paul’s non-adherence to the rules of realism is the piece Dua Hati, in which a two tree trunks supported by steel beams join together at a point.

“The wood and metal are like a husband and wife with very different characters, but they can work together,” said Paul.

Much like the metal and wood in Paul’s painting, the character of both artists may be different, but the joining of their art is like a successful symbiotic relationship.