Eight of the Best Smaller Islands in Indonesia 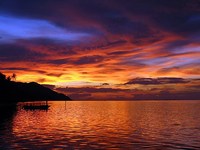 With over 17,000 islands in the archipelago, both large and small, the tourism possibilities seem endless. Each island virtually has its own culture and traditions, some dating back centuries. The larger islands like Sumatra and Java attract their fair share of foreign visitors as does the smaller island of Bali that is totally drenched in tourists. However, there are a great proportion of smaller islands in the archipelago that are rarely visited by your normal tourist and it these islands that are the most interesting with all manner of activity available such as surfing, diving and snorkelling, relaxing on isolated beaches, and fishing. But it’s not only these activities that draw the out-of-the-norm tourist to these smaller islands it is also the culture and the people of the respective island. So, I have put together seven of the islands that I consider to be the best in the archipelago. These eight islands doesn’t mean that the other islands in the archipelago aren’t worth visiting. On the contrary, they are, and each has its own uniqueness and each one just as attractive in its own right.

Nias Islands: The majority of visitors to this island are surfers who revel in the superb swells. Nias is the largest of the islands off Sumatra. The island was once part of the famous Hippie trail of the 1960s and particularly travelled by surfers, After Nias they went on to Bali. Nias is best known for its unique diversity of festivals and celebrations. The most famous events are the War Dances that are performed regularly and mainly for the benefit of tourists. Nias is also known for Stone Jumping, a manhood ritual that sees young men leaping over two meter stone towers to their fate. It is a beautiful island with super-friendly people and sweeping bays with white-sand beaches.

Bangka Island: Bangka is an island province together with Belitung Island and lies just east of Sumatra and separated by the Bangka Strait. To the north lies the South China Sea. To the east, across the Gaspar Strait, is the island of Belitung, and to the south is the Java Sea. Most of the island consists of lower plains, swamps, small hills, beautiful beaches as well as white pepper fields and tin mines. Basically, the majority of the inhabitants on the island are Malay Indonesians and Chinese, mostly Hakkas. The population is split between those who work the pepper farms and those who work on the tin mines. There are only a few isolated pockets of forest on the island and this doesn’t give much scope for exploring but the scenery is beautiful.

Moyo Island: Moyo Island is located at the mouth of Saleh Bay. It is a nature reserve with wild oxen, deer, wild boars and a great variety bird species. Visiting the island is best during the dry season from June through August. A few kilometres off the north coast of Sumbawa, the national park island of Moyo Island is probably the most rewarding as it is surrounded by beautiful coral reefs. It’s relatively easy to get to Moyo. Take a bemo from beside Seketang Market in Sumbawa Besar to Air Bari , a small port settlement to the northeast. From Air Bari, you can charter a boat to Moyo. There are basic private rooms at the PHPA post at Tanjung Pasir on the south coast, where most boats from the mainland arrive. It is quite a stunning place to visit. There is limited accommodation and camping outside is not such a good idea.

Rinca Island: Rinca, is a small island near Komodo island in the East Nusa Tenggara chain of islands. The island is famous for komodo dragons but not as much as the island namesake. Being the lesser known island and less visited than Komodo, it is an ideal place to see the Komodo Dragon in its natural environment with fewer people to disturb them. Day trips can be arranged from Labuanbajo on mainland Flores by small boat.

Bunaken Island: Bunaken is part of the Bunaken National Marine Park, which has some of the highest levels of marine biodiversity in the world. Scuba diving is the main attraction on this island. Bunaken is located at the north of the island of Sulawesi. Biologists believe that the abundance of hard corals is crucial in maintaining the high levels of diversity in the park. Although there are inevitable conflicts between resource protection and use by people, the Indonesian government is taking a fairly unusual and pragmatic approach to park management. Bunaken Marine Park has become an important example of how Sulawesi, and the rest of Indonesia, can work to protect its natural resources. Bunaken Island would rate, in my opinion, as the second best dive site in Indonesia.

Bacan Island: The island is to the north are the islands of Kayoa , Makian, Ternate and Tidore in the Maluku Island chain. The interior of the island is relatively uninhabited and none of the dwellers on the coast are indigenous. The most significant town on the island is Labuha situated on the west side of the island. Nearby is the town of Amasing once a significant settlement on the island. The island is in part of volcanic formation, and the existence of hot springs points to volcanic activity. There are, however, especially in the southern portion, ancient and non-volcanic rocks. Bacan is of interest to zoologists as the island is very rich in birds and insects.

Ambon Island: the island lies off the south-west coast of the much larger Seram island. It is on the north side of the Banda Sea, part of a chain of volcanic isles that form a circle around the sea. Wild areas of Ambon Island are covered by tropical rainforest and are part of the Seram rain forests eco-region. It is mountainous, well watered, and fertile. Ambon has few indigenous mammals and birds are more abundant. The insect diversity of the island, however, is rich, particularly in butterflies. Seashells are obtained in great numbers and variety here. Tortoise-shell is also exported. Corn and sago are produced, and hunting and fishing supplement the diet. Nutmeg and cloves, once grown in abundance, are produced in limited quantities. Ambon is another popular dive-island in Indonesia although the currents are strong and swift.

Raja Ampat Islands: This island group is located off the northwest tip of Bird’s Head Peninsula on the island of New Guinea. Raja Ampat is an archipelago comprising over 1,500 small islands, bays and shoals surrounding the four main islands of Misool, Salawati, Batanta and Waigeo. It encompasses more than 9.8 million acres of land and sea that also contains Cenderawasih Bay, the largest marine national park in Indonesia. Raja Ampat’s coral diversity, resilience, and ability to replenish reefs make it a global priority for marine protection, as human activity here has the potential to be catastrophic. Over 1,070 fish species, 537 coral species (a remarkable 96% of all scleratinia recorded from Indonesia are likely to occur in these islands), and 699 mollusc species, the variety of marine life is staggering. Raja Ampat is the ultimate in diving with its crystal clear waters. If you are not a diver, then revel in the bays views and the white-sandy beaches. 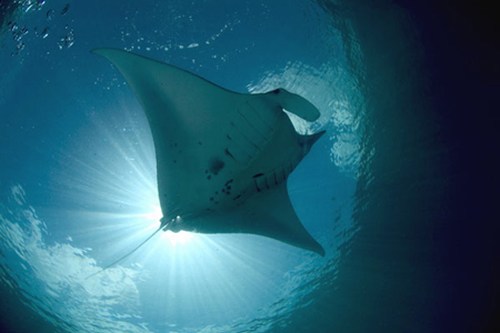