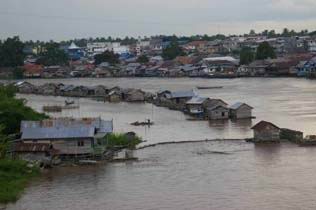 Ecotourism is the tourism of the future and is viewed by so many travellers as the way to travel. Award winning journalist, Duncan Graham of Indonesia Now, recently visited Kalimantan and explored the immense opportunities for ecotourism on the island.

There’s a lot of curiosity and much activity among the mud and mangroves at a Kahayan River inlet in Palangkaraya, the capital of Central Kalimantan.

Six carpenters are building cabins atop a stripped-down, 20-meter former cargo boat bought by two foreigners with a dream. They want to introduce serious ecotourism to the huge but almost empty province — and by doing so save the forests and the Dayak who depend on them.

The inlet, with two primitive hand-cranked steel cable winches, is a local bush version of a dry dock though heavy rains have flooded the site.

That hasn’t deterred the workers who are racing to get the craft looking presentable for the May 23 celebrations of Central Kalimantan’s 50th anniversary.

When the cheering has faded and the bunting been pulled down the engine will be installed, heaved in by muscle power, for this open-air boatyard has few facilities. Then the fittings will be finessed to ensure they’re of a standard to meet the needs of international clients.

The Dayak Hope will be a floating boutique hotel with five double cabins. It will be capable of sailing into the upper reaches of the province (known locally as Kalteng), giving ecotourists the chance to see distant Dayak villages, wild (not rehabilitated) orangutans scrambling through the treetops and tropical flora and fauna.

For businesswomen Lorna Dowson-Collins and Gaye Thavisin this is a major undertaking. They plan to put the Indonesian part of Borneo on the world map of discerning tourists looking for experiences they can’t get in Amsterdam or Adelaide.

The couple have already sunk more than US$60,000 (Rp 550 million) of their own money into the plan, which includes development of a river port in Palangkaraya, more floating hotels and extensive marketing overseas.

“Gaye and I have gone beyond just ooh-ing and aah-ing and thinking how great it would be to open up the Kalimantan environment to others,” Lorna said.

“We’re now up to our necks in a venture that’s driven by our vision to protect Kalteng’s unique forests and create new sources of income for the local jungle-dwelling communities.”

Up to their necks? An outside observer might think this a defective metaphor. Add the crocodiles of business envy, the leaches of bureaucratic interference, the everyday hazards of remote-area life made doubly difficult in the tropics, and the fickleness of the tourist industry — and you can see that on the Richter risk scale this show is quaking.

Lose one visitor into the swirling brown crocodilian waters or have a hard encounter with a hornbill and the word will move at warp-speed through the Internet.

Fun in frontierland? Sure — but only if it comes with air-conditioning and cell phone access.

This is “Lord Jim” country, the land made famous in Joseph Conrad’s classic. In the story, a disgraced young seaman shrinks from society to live with the Dayak. He helps better their lives but is killed after making a second error of judgment. (Read the book if you want to know the first.)

Fortunately, neither Lorna nor Gaye are dewy-eyed business maidens. Both have sweated long enough in Indonesia to know that foreigners giving birth to a new idea won’t have an easy labor, whatever soothing sounds are made by politicians who say overseas money’s welcome, but won’t ease the traumas of investment.

Lorna grew up in Jakarta where her father was a doctor at the British Embassy until he was kicked out of the country. Before that happened the family went sailing most weekends through the Thousand Islands just offshore from the capital — an experience that helped develop Lorna’s love of adventure.

Dad was expelled allegedly for treating Indonesians and referring patients to Singapore surgeons rather than the locals. Whatever the reason it gave young Lorna insights into the way things are sometimes done in the Republic.

She went on to study anthropology and work in the UK on international development programs, but was soon back in the archipelago.

In Indonesia she’s been a consultant with the Australian aid agency AusAID in Aceh, and with a non-government organization (NGO) in Kalimantan on training projects and developing business enterprises.

Gaye is an Australian who formerly managed the Kalimantan Meeting Center (KMC), a three-star hotel and restaurant at Rungun Sari, about 36 kilometers northwest of Palangkaraya. She now runs a foreign investment company, PT Kalimantan Tourism Development.

Both are members of the Subud community, a spiritual movement started in Java early last century. They live at Rungun Sari where a magnificent meeting hall has been built and is available to all faiths.

“My river journeys whilst working for the NGO took me to the heart of the local people’s lives and their rapidly depleting forests,” Lorna said.

“Rivers are still the main transport system linking remote villages, a fascinating but uncomfortable affair. This led me to think: What could be better than a boat hotel with comfortable cabins and a restaurant viewing deck to enjoy the passing, peaceful days of village and jungle life?”

Indeed. Great idea but nothing stands in isolation. The current investment buzzword is “infrastructure” meaning roads, ports, airports, hotels and other public facilities have to be fixed first.

There aren’t too many roads in Kalteng — the biggest province in Borneo at 154,000 square kilometers. However, by Indonesian standards the main links are in reasonable condition.

Borneo isn’t jam-packed Java: There are only 10 million in the whole Indonesian section of the island, with maybe less than 250,000 in Palangkaraya.

The locust swarms of Hondas and Yamahas have yet to plague the highways and the air is breathable outside the smoke season when farmers set fire to the forests in defiance of edicts from Jakarta.

There’s no international airport so connections — frequently late — have to be made through Jakarta or Surabaya. Foreigners remain a rarity — only 2,000 visited last year — and not all Palangkaraya hotels are either comfortable or welcoming to outsiders.

The plan is to run Dayak Hope from the river close to the KMC hotel while port facilities in Palangkaraya are upgraded. Then, if all goes well, boats two and three will be built. These will probably be custom-built rather than converted.

The original budget of Rp 280 million for the boat alone has already doubled. Other investors have come to the rescue so the project is still afloat and heading for commercial operation in September — with a plan to break even by the second year.

Mike Johnson, a marine environmental anthropologist from East Java, has been hired to advise on the work, though the design came from a French marine architect.

Johnson reckons the cost of building a floating hotel from the keel up will be little more than buying and reshaping an old boat — and a lot easier.

The proposed tariff is Rp 4.3 million per person for a three-day, all-found river trip. The partners reckon this will attract a market between backpackers who’ll rough it anywhere, and the top-end tourists who want five star toilets.

Lorna put together a business plan entered it in an international competition and won a useful Rp 74 million for her proposal. Through this she met Dutch travel agents interested in supplying management skills, clients and maybe investment.

“Our first planned tours will be along the Katingan River into the newly established Sebangau National Park, one of the last surviving peat swamp forests in Kalimantan and home to the largest known remaining orangutan populations in the world,” she said.

“Unfortunately, illegal logging and forest fires continue to threaten the survival of the park.

“Our overall aim is to promote ecotourism in Kalteng as a viable way of protecting the forest and promoting the welfare of local communities through creating an effective strategy for economic growth.

“The communities depend on the natural resources for their livelihoods. When use is sustainable the balance in the ecosystem is maintained. But where income is low the local people are forced to exploit.

“Poverty is a large threat to biodiversity. To conserve nature it’s important to deal with poverty alleviation.

“We believe that our boat will be the vehicle to develop a social enterprise that can make a real difference.”