Dokars on the Way Out: Bali 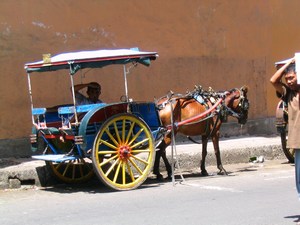 On that afternoon on Jl. Kartini in Denpasar, Moh Kusnan, 65, chatted with two of his colleagues; Dewa Ngurah and Wayan Pinen. The three are owners and drivers of the steadily disappearing horse-drawn carts known here as dokar. The three were involved in a discussion over the declining number of passengers utilizing the carts. Nowadays, Kusnan said, there were only a handful of traders and buyers at the traditional markets that used the dokar. “Not many people want to go by horse-drawn cart anymore,” he said.

The cart tariff is relatively cheap, Rp 5,000 to Rp 10,000, depending on the distance. One cart is capable of accommodating three passengers. From Badung market to near Puputan square, or vice versa, for example, the fare is only Rp 5,000, while from Sudirman area to Sanglah it is Rp 10,000.

“But, that rarely happens,” he added.

Tourist guides usually order cart drivers one day in advance. For one trip around the city, Kusnan can receive Rp 25,000 to Rp 50,000.

He recalled a period in the 1980s when the carts were the most favored means of transportation among residents of Denpasar. At that time, the number of dokar in the city stood at around 400, he said. However, due to technological advances, the father of four said, the carts had increasingly been replaced by motorcycles and cars.

Public transportation, he said, had been taken over by motorcycle taxis and motorized three-wheeled vehicles known as bemo.

Dokar are no longer found at the Tegal bus terminal, which was once dominated by the carts serving Denpasar. Kusnan and 30 other cart drivers now prefer to operate around Badung, Kumbasari and Kreneng traditional markets.

“We had to move closer to our customers — traders and buyers at the markets here. There are only 20 to 30 carts operating now. The other cart drivers have switched to other professions,” Kusnan said.

“If this wasn’t a sort of hobby for me, I too would have searched for another job,” Pinen, 45, said.

Kusnan added due to the carts’ declining popularity, there is no new generation of drivers willing to operate horse-drawn carts in Denpasar.

“Even my children … none of them want to do it,” he said.
The horse-drawn carts could very well disappear, possibly within the next five to 10 years, Kusnan said.

Ni Wayan Rentig, a cart customer from the markets, said she preferred to use carts because the fare was cheaper than other modes of transportation and the drivers would take their passengers to the very front door of their houses. Most drivers even helped their customers unload the cart, she added.

“A taxi could do the same thing, but the fare would be very expensive compared to a dokar. Using a motorcycle taxi is impossible because I usually bring a lot of goods from the market. The carts offer a lot of space to carry goods,” Rentig said, adding she only had to pay Rp 10,000 for a trip home from the markets.

Rentig hoped the carts would be able to survive in Denpasar as her grandchildren often asked for rides on them.

“We will try to help maintain the existence of the carts by holding an annual cart-decorating competition in conjunction with the commemoration of Denpasar’s anniversary,” Erwin said.

The city administration, Erwin said, had provided the cart drivers with tour training sessions in which they were shown how to drive safely on the thoroughfares and take care of their carts and their horses’ health.

A private sponsor had even given them uniforms, he added.

“In reality, however, not all tourists are willing to go by the carts and we can not force them to,” Erwin said, adding the city would incorporate traveling by horse-drawn cart into the 2008 city tour program.