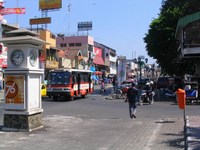 During the time of the Soeharto regime tourism flourished in Indonesia and especially in places like Bali and Yogyakarta. Western tourists virtually flocked to Yogyakarta to experience the Javanese culture, visit the archaeological icons in or near the city and, this was mainly due to Yogyakarta’s reputation of being the cultural heart of Indonesia and the Yogyanese being the friendliest in the archipelago. These two factors still remain the same today and gradually western tourists are returning to Yogyakarta albeit slowly after a hiatus in tourism due to many internal factors in the country. In general, western tourists, and to a certain extent domestic tourists, stay in Yogyakarta for a period of three days. Of course in my opinion this is very little time to experience all that Yogyakarta has to offer, but, as long as the tourists see the main sights they seem to be satisfied with their visit.

So, I compiled a list of places most popular for tourists visiting Yogyakarta as well as a few of my favourites:

Borobudur: The second largest Bhuddist monument in South-east Asia, the temple is a ninth-century Mahayana Buddhist monument. This spectacular and awesome monument comprises six square platforms topped by three circular platforms. It is adorned with 2,672 relief panels and 504 Buddha statues. The main dome is located in the centre on the top level and legend has it, if you reach inside and touch the Bhudda then peace and good luck will befall upon you. Surrounding the area are seventy-two Buddha statues seated inside stupas.The monument is both a shrine to the Lord Buddha and a place for Buddhist pilgrimage. For pilgrims, during the journey, the monument guides them through a system of stairways and corridors with 1,460 narrative relief panels on the wall and the balustrades. Borobudur has an interesting history. It was abandoned following the fourteenth century decline of Buddhist and Hindu kingdoms in Java when the Javanese converted to Islam. In 1814 it was discovered by Sir Thomas Raffles, the British ruler of Java. Over the decades, Borobudur has since been preserved through several restorations. The largest restoration project was undertaken between 1975 and 1982 by the Indonesian government and UNESCO, following which the monument was listed as a UNESCO World Heritage Site. Nearby are two other Candi’s worth visiting – Candi Mendut and Candi Pawon.

Kraton Yogyakarta: Founded by Pangeran Mangkubumi in 1775 whose title was Sri Sultan Hamengku Buwono 1, chose the site of the Kraton as it was located between the Winongo and Code rivers. The Kraton Complex is a huge residential complex that had served as the residence of the Sultans of Yogyakarta for almost250 years. The complex includes royal palaces and also houses for the king’s attendants and servants. Such is the size of the complex that it is often called a “city within a city”. The palace complex stretches north to south and is one place that will take you about 4 hours to walk around properly to soak up the atmosphere. Respectable clothing is a must and you can take photographs but do it discreetly so as not to disturb the peace and harmony of this sacred place. The palace remains open from 9am to 3pm.

Taman Sari Water Palace: A spectacular place to visit and a must-see on your itinerary. Located only a ten minute walk south-west of the Sultan’s Palace, it is steeped in history. Translated, Taman Sari means ‘Beautiful Park’. Built in 1757 by Sultan Hamengku Buwono 1, the style of the building is a mixture of Javanese and Portuguese architecture. At the east gate of the park stands two dragon statues marked 1682 and this being the year according to the Javanese Calendar when Taman Sari was built. Taman Sari is also called Segaran – a Javanese word meaning ‘man-made’ or ‘artificial sea – and the place where the sultans went boating by passing under the suspension bridge called Kreteg Gantung which connects to the front of the palace. This water tunnel was also a means of escape should the palace be under threat of an enemy attack. The park sits on 10 hectares of land, and, in the grounds can be found fragrant Kenanga trees. Interestingly, one part of this place is called Pulau Kenanga. Lofty buildings and ponds were specially built and it was from here the Sultan could observe women bathing and choose his ‘lady’ for the night, or so it was said. The ponds were also used by the Sultan and his family as Royal Bathing Pools.

Prambanan Hindu Complex: The largest Hindu temple compound in Central Java in Indonesia, located approximately 18 km east of Yogyakarta. The temple is a UNESCO World Heritage Site and is one of the largest Hindu temples in south-east Asia. Built by the Sanjaya Dynasty it is characterised by its tall and pointed architecture, typical of Hindu temple architecture, and by the 47m high central building inside a large complex of individual temples in three courtyards. You can actually climb the steep steps and enter into the shrines where you will find adorned statues such as Nandi the Bull. The complex is dedicated to the Hindu holy trinity of Siwa, Vishnu and Brahma. If you want to visit this site then I strongly suggest you get there early in the morning before the tourists buses arrive at 10am. After that you will have little chance of a decent photograph.

Kota Gede: This is the silversmithing centre in Yogyakarta. Here you will find a plethora of shops selling some of the finest silver items in Indonesia. It is a great place to explore and my advice is to check out the smaller shops down the gangs if you are looking for the really good silver. It is also a place steeped in history. The site of the remains of a palace Kraton in the late 1500s and early 1600s for the rulers of Mataram can be found here. Legend and myth surround much of the information available for the time the palace was intact, and only the Royal Graveyard (Imogiri) and a few small sections of wall of the palace remain. In the expansion of the city of Yogyakarta in the late twentieth century, Kota Gede is merely a suburb within the city. At the time of Indonesian independence in the 1940s and after considerable publicity was given to the silver workers within this locality. The name of the location in higher more respectful level (Kromo) Javanese is Pasar Gede.

Here are a few of my favourite places in and around Yogyakarta that I have enjoyed visiting many times over the ten years I was there:

Telogo Putri: Located in the cool mountain areas to the north of Yogyakarta, not far from Kaliurang, you will find this serene place. The ascent to the mountains takes you through the outskirts of Yogyakarta where life is less hectic – small villages, each recognized for their own craft, whether it be carving, art or weaving. Gunung Merapi is constantly visible with its caldera ringed with soft white clouds and plumes of ashen smoke rising from its centre. Telogo Putri is well patronized, not only by locals and domestic tourists, but foreign tourists alike. You have to pay the obligatory Rp5,000pp and Rp5,000 per vehicle and as you descend off the small ridge road and into the extensive carpark surrounded by a semi-circle of high, dense trees, and facing them the high and terraced hillside backing onto lush jungle inhabited by numerous troupes of monkeys. Telogo Putri serves as a local market and the variety of produce and sweet Javanese delights can be found on the few levels above the warungs. Walking to the rear of these levels you come across the entrance to the stone-paved walkway through the jungle. The path takes you through thick jungle and the variety of flora that is outstanding.

Parangtritis: Located in the Bantul Regency, twenty-eight kilometres to the South of Yogyakarta, lies the peaceful idyllic village of Parangtritis. Rugged limestone cliffs overlook huge waves pounding the shoreline; the wide expanse of sand dunes merging into the black sandy beach. During the rainy season the beach is windswept at times; and during the dry season – very hot. Immensely popular, tourists and locals alike travel to Parangtritis not only for the sunbathing and swimming; but also for the fishing, and the tranquil setting ideal for meditation. Delman – two wheeled horse drawn buggies – transport people to and fro along the vast expanse of sand; the horses aimlessly trudging as they go in the thickness of the black sand. The heat of the day can be refreshingly satiated with milk fresh from the green coconuts sold at the numerous palm-thatched pagodas. Food stalls abound with tempting delights. Hotels and losmens catering for those wishing a longer stay are scattered throughout the village.

Magelang: Magelang is one of the largest city of the 1,130 km² Magelang Regency, Central Java, Indonesia and also the largest town in the Kedu Plain between Mount Merbabu and Mount Sumbing. It is in a fertile agricultural area and one of the most densely populated regions on Java. The town, is divided into two regions, Magelang Utara (North Magelang), and Magelang Selatan (South Magelang). Since 2007, the city expanded into three regions, adding Magelang Tengah (Center Magelang). The city has historically been a military post, dating back to the Dutch East Indies colonial era. It subsequently acted as an army stronghold for Indonesia pro-independence movement against the Dutch government during the resistance period. Many of the town’s colonial-era buildings have become heritage landmarks, such as the Karesidenan Kedu building. History records this is the place where Prince Diponegoro was trickily arrested by the Dutch colonial government in order to end the Java War (1825-1830). The chair that Prince Diponegoro sat on, still exist in that place, which has now become a museum. A fingernail, which is believed to be Diponegoro’s, still can be seen on the arm of the chair. A statue was erected in his honour in Alun-Alun (town square)of Magelang.

Pasar Ngasem: Pasar Ngasem is more commonly known as the bird market, and, for obvious reasons!. Outside the entrance on the streets are live birds and cages for sale. But, it is inside the market that is, for sake of a word, surprising. It is a cacophony of alleyways with cage upon cage of birds and animals stacked on top of each other. It’s a smelly place and not one for the faint-hearted. However, it is an interesting place to visit, nonetheless.