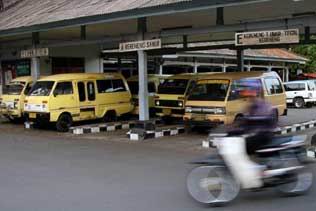 Some half a dozen old public mini vans line up in downtown Denpasar’s Kreneng terminal. The vans were empty and the terminal was quiet. Seeing a passerby at the terminal, a 40-something man quickly got up and asked her where she was going as the article in the Jakarta Post explains.

“I can take you anywhere,” public mini van driver I Made Suardan said. His eager face dropped when she said no.

Unlike terminals in other cities, which are packed with passengers, Denpasar’s five bus stations are forsaken by the public. Suardan’s minivan, which he drives between Kreneng, Denpasar, to Batu Bulan, Gianyar, had been parked in the terminal for four days when The Jakarta Post spoke to him on Thursday.

“I haven’t had any passengers for four days,” he said.

Public transport in Denpasar is very rare, and many areas are not covered at all. For newcomers without private vehicles, getting around the city is a dull and expensive exercise in waiting for rare taxis and paying a lot for them.

Public minivans rarely leave the terminal unless enough passengers get aboard at the start.

“That rarely happens. There’s usually only one or two passengers,” said Riyanto Supriyadi, an official at the Kreneng terminal.

Fei Efendi, 26, an architect who moved to Bali from Bandung, West Java, two years ago, said that he had to ship his old motorbike here because he couldn’t get around in city.

“I was frustrated with the almost non-existent public transport here at first because I had to hop on a friend’s ride all the time,” he said.

“My problem was solved when I had my bike sent here for my private use,” he said.

“You’re not free to go anywhere here if you don’t have your own ride,” he said.

The high level of ownership on private vehicles and motor bikes in Bali, however, is the source of the public minivan drivers’ misfortune.

“It is useless for us to drive our routes, because there is no one waiting for public minivans on the street. Everyone uses their own vehicle,” Suardan said.

According to data from the city’s transportation agency, there are around 459,000 private cars and some 360,000 motorcycles roaming the busy streets of Denpasar, which is populated by 572,000 people.

“The market for public transport here is very low. Only 2.5 percent of the population uses it,” Denpasar Transportation Agency Head I Gusti Ngurah Winaya said.

Winaya said that the public’s high purchasing power here caused them to buy their own vehicles. People can easily get a motorcycle with only Rp 500,000 down payment and paying the rest using bank loans.

“It is also much more convenient in terms of mobility and economy to use motorcycles than taking public transport,” he said.

He said that the agency had attempted to boost the use of public transportation.

“The public minivans do not cover every area of the city. So in 2001 we opened new routes, so people would not have to use their vehicles. We subsidized the minivans for three months to serve the new routes. It failed, because there were still no passengers even on the new routes,” he said.

He said that Denpasar, with a population of more than 500,000, should already have buses serving its main roads as regulated in a 2001 ministerial decree.

“That is one of the solutions to overcoming the traffic problems that come with the abundance of vehicles. Currently, Denpasar has seen some traffic jams on its main roads, such as Jl. Diponegoro, Jl. Teuku Umar and Jl. Imam Bonjol,” he said.

Bali chapter of the Land Transportation Organization secretary I Ketut Widi said that the number of public minivans operating in the city has decreased substantially.

“There are only around 400 now. The minivans do not operate daily and sometimes drive outside their routes,” he said.
In 2001, the number of public minivans was 1,043.

Winaya said that the provincial government was designing an integrated public transport system for Denpasar, Badung, Gianyar and Tabanan to overcome the heavy traffic entering Denpasar from its surrounding cities.

“We’re still in discussion on what mode of transportation should be used,” he said. “The system should be traffic jam-free and the vehicles should be air-conditioned to lure the public to use them,” he said.