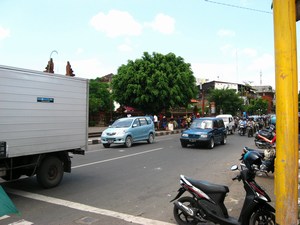 Having just spent two months on holiday with my wife in Bali, we had on occasions to go to Denpasar albeit reluctantly. I actually found the pollution there worse than in Yogyakarta. There are constant traffic jams (macet) and it is these that are one of the causes of pollution with smoke and other pollutants being pumped out of car exhaust pipes and buses choking those walking down the pavements. There has been a massive rise in the number of vehicles on the island of Bali and it never seems to amaze me why, not only visitors to the island, but the locals as well are reluctant in many ways to use public transport or walk to places that are close they wish to visit. Okay, so you have a vehicle, but it seems more feasible to leave that vehicle at home and utilise the public services available, or better still, keep fit by walking.

Here is a related article about the increasing levels of pollution in Denpasar:

In the last three years, the level of air pollution in Bali’s capital, Denpasar, has shown a steady increase, making it a less healthy place to live. Adding to the pollution is the city’s increasing level of lead. The toxic metal showed levels three times higher in 2007 than in 2006. Furthermore, the level of carbon monoxide in 2007 was a shocking 19 times higher than in 2006. The colorless, odorless but very poisonous gas was mostly released by motorized vehicle exhaust according to I Wayan Ananta Wijaya.

Kencanawati is a resident researcher with the university’s Center for Environmental Research, which conducts an annual study on the level of air pollution in the city.

“The level of other pollutants has also displayed a significant increase,” she said.

The increases were recorded at a location on Jl. Gajah Mada, one of the busiest traffic channels in downtown Denpasar. It is also the commercial center that hosts three big markets and hundreds of shops.

However, the study found that Ubung in north Denpasar had the worst air pollution levels.

“The region ranks first in each and every type of pollutant we recorded,” she said.

“The levels of dust pollutants recorded in Ubung and Hang Tuah Street in Sanur exceeded the acceptable standard,” she said.

This means that the levels of those pollutants posed a real threat to residents’ health.

“The research estimated that 193,589 residents had suffered from upper respiratory tract infections in 2007 alone. Their medical treatments generated a combined cost of nearly Rp 4 billion (US$434,782),” she said.

Kencanawati stated that motorized vehicles with fossil fuel combustion engines were the biggest contributor to the city’s increasing level of air pollution.

“In 2006 around 42 percent of vehicles in Denpasar ran on less than optimum engines due to lack of regular maintenance. These engines generated significantly more pollutants than the ones maintained on a regular basis,” she said.

She advised the city administration to take immediate steps to tackle the air pollution problems before they grew into an unmanageable threat to residents’ health.

“Limiting the number of vehicles, limiting the operational year of vehicles, creating and expanding green-belt zones in the polluted regions and making emission tests mandatory are several steps the administration could take,” she said.

She stressed that air pollution was a problem that could be contained and minimized. She pointed out the period from 2003 to 2005 when the city managed to significantly lower the level of air pollution.

“Unfortunately, air pollution has managed to make a disturbing comeback,” she added.