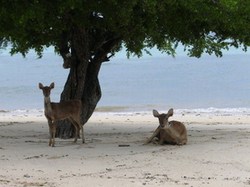 Due to widespread illegal hunting practices and rapid deforestation, the population of wild deer (cervus timorensi) in West Nusa Tenggara province is rapidly shrinking. Moyo Island constitutes one of the 20 parks for nature tourism, nature conservation and guided hunting managed by BKSDA. An official survey on the deer population in West Nusa Tenggara has never been conducted, but the survey in Moyo could be used as a guideline to estimate the deer population of the whole province. Using a rough calculation, population decline may have reached 60 to 80 percent over the last 20 years. BKSDA could easily spot groups of deer in West Nusa between 1985 and the 1990s, but now deer are now hard to find.

“The deer population on Moyo Island alone, for example, has sharply dropped from about 6,000 in 1985 to 3,000 in 1995 and further down to only about 1,000 in 2005,” Asep Sugiartha, head of the West Nusa Tenggara Nature Resource Conservation Agency (BKSDA), said late last month according to Panca Nugraha.

“The real number could be below one-thousand,” Asep said, citing a survey on Moyo Islands, Sumbawa regency.

It is difficult to deal with illegal hunters due to an absence of attention from the related institutions, Asep said.

Early last year BKSDA officers raided a restaurant in Dompu regency offering deer meat on its menu. However, the restaurant owner claimed he was not serving deer meat, but rather putting it on the menu to attract customers only to serve another animal meat.

According to the owner, the restaurant offered deer meat bought from locals once a month, Asep said.

“During our inspection, we mostly found stuffed deer heads, but we never captured the perpetrators,” he said.

Asep said BKSDA seized stuffed deer heads in 2006 BKSDA at Mataram’s Selaparang airport that were to be sold in other cities.
The finding could not be legally processed because the buyers had bought the objects from other sellers and not from the hunters directly, he said.

In order to prevent extinction, BKSDA initiated deer breeding businesses in 2004. So far up to 29 licenses have been issued by the agency, raising over 200 deer.

“The license is valid for five years. In order to extend a license, owners are obliged to hand over 10 percent of their breeding results to BKSDA to be returned to their natural habitat,” he said.

According to the director of the West Nusa Tenggara chapter of the World Wildlife Fund, M. Ridho Hakim, the rate at which the deer population is decreasing has reached an alarming level.

He urged the local administration to take action to rectify the problem.

“The sharp fall in deer population has not only been caused by illegal hunting practices, but also by the widespread destruction of their habitat,” he added.

“The provincial administration must regulate to prevent the trade of deer and deer commodities, stop hunting practices and curb illegal logging,” Ridho said.