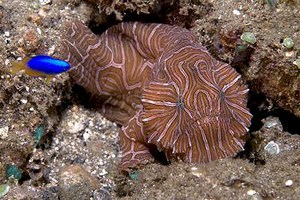 Indonesian seas and jungles harbour a realm of species unique to the archipelago. There are even places on these islands where man has not yet put down his foot and embarked on a journey of discovery. We are always hearing about new species being discovered in these isolated areas. Recently, scientists discovered a fish that crawls instead of swimming and has forward-looking eyes like humans could be part of an entirely unknown family of fishes. The creature sighted in Indonesian waters off Ambon Island has tan-and peach-coloured zebra-stripping. It uses its leg-like pectoral fins to burrow into cracks and crevices of coral reefs in search of food. According to scientists, the recently discovered relative of the anglerfish will have to undergo DNA scrutiny to verify that it is unique.

But the world’s leading authority on anglerfish says he’s never seen anything like it. According to UW professor, Ted Pietsch, the species may have escaped notice until now because they are so good at sliding into narrow crevices. Alfred Russell Wallace was most certainly aware of the natural, living treasures the archipelago possessed.