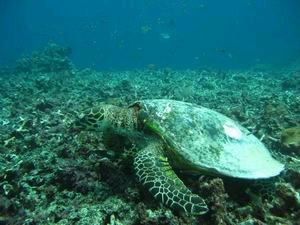 The Bali Natural Resources Conservation Center (BKSDA) runs regular operations to detect the manufacture and sale of tortoiseshell products, its officers say. “We regularly check handicraft shops around Bali for tortoiseshell. If people are caught selling or handling this material, they could receive a five-year maximum jail term, a 10 million Rp fine or both,” says BKSDA licensing coordinator, Budi Utomo. The BKSDA also trains turtle zoo volunteers and workers in turtle protection and the laws covering handling or using any turtle by-product. Balinese Hindus have for centuries used turtles in their religious practices. Under local laws, turtles may still be used during certain religious celebrations, but all turtles used must be registered and licensed by heads of religion and the BKSDA.

According to an employee of a Turtle Island zoo, no more than three turtles may ever be used during a religious ceremony.

“Normally one turtle only would be used, at the absolute maximum three. One is buried, one is placed near the temple and the third is released live back to the sea. We want to protect these animals,” the employee said. “If we don’t, they will be gone forever”