Coastal Languages on the Brink of Extinction: Jayapura, Papua 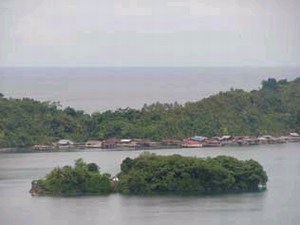 Herman Rumadi Hamadi, 88, could not hide his anguish when asked about the number of people still speaking the local language in his village. “I’m not sure, but I guess there are only six people who can speak Tobati fluently,” said Herman, the tribal chief of Tobati village on the northern coast of Papua. “Once the six die, the language will disappear,” said Herman, admitting that he himself was no longer using the language of his ancestors. Herman has every reason to worry. The six people who still speak Tobati are all over 60 years old, while the young are more fluent in Bahasa Indonesia than in their mother tongue, thanks to the widespread use of the national language.

That situation has been exacerbated by the fact that more and more Tobati villagers have opted to move to the provincial capital of Jayapura where they communicate in Bahasa Indonesia.

“All of Jayapura and Abepura used to be our communal land, but now our sago plantations have been urbanized and we live alongside newcomers,” said the ondoafi (tribal chief) who lives in Entrop, Jayapura.

The Kayu Pulau tribe in Jayapura and the Nafri community in Abepura, too, are being culturally overwhelmed by the pace of development, forcing them to increasingly abandon their regional language.

According to Herman, Tobati people have been in contact with the outside world since the 1600s and by the end of the 1800s, the Dutch government had made this village an administrative center, triggering rapid economic growth.

It is no surprise, therefore, that Herman himself has been speaking Malay since he was a child. Intermarriages with newcomers have only hastened the desertion of the language.

“Our grandchildren speak Bahasa Indonesia fluently. They seem to have no roots because even though they are Tobati people they don’t speak the language. How can we perform our customs, dances and other ceremonies in the Tobati language?” asked the father of 10, who claimed to be very tough in teaching Tobati language to his children.

“This is really worrisome. If the Tobati language disappears, our culture will also vanish and we will become strangers in our own land.

He said young people in the village preferred to become civil servants or work in the private sector than to become fisherman.

“The forests where local people used to make boats have turned into towns,” he said.

Articles and dances containing magic vanished with the arrival of Christianity in Papua. “Traditions, magic and belief in the spirits of our ancestors have been replaced with Malay hymns, thus there is a gradual shift away from the use of regional languages,” Herman said.

Herman urges the government to help preserve the language, which is only spoken by six elderly people.

“If the government could provide compensation for travel expenses and set up training centers, we would be very eager to teach this language to the younger generation,” said Herman, adding that with the Tobati people living in different parts of Jayapura, meeting places were needed for the language courses.

Aksamina Awinero, 41, ondoafi Obed Awinero’s child in Nafri village, shares the same feeling. “We used to speak Nafri to our children, but when they went to school they spoke Bahasa Indonesia more than Nafri and now they speak very little Nafri,” said the mother of seven.

Data issued by the education and culture office in Jayapura revealed that in 1991 only 800 people in Tobati and Injros villages were still using the Tobati language, while other regional languages, Nafri and Kayu Pulau, were spoken by 1,630 and 573 people respectively.

It also showed there were 249 regional languages in the province, meaning about the same number of tribes. According to Summer International Linguistics (SIL) in 2004, Papua has 264 languages, with Malay, later known as Bahasa Indonesia, serving as a bridge through which the hundreds of Papuan languages meet. Bahasa Indonesia also allows Papuans to communicate, interact and enter inter-tribe marriages.

The widespread use of Bahasa Indonesia has not only sped up development in the province, but also killed off local languages.

The center’s 2005 and 2006 research findings gave reason for concern over the serious condition of the three languages in Tobati-Injros, Kayu Pulau-Kayu Batu and Nafri.

“We predict that after three generations these three regional languages will disappear unless local communities themselves and the government undertake efforts to preserve them,” he said.

It also found out that people who still speak local languages are above 40 years old, with younger generations having only a passive comprehension of their languages.

Assuming that a generation spans about 20 years, within 60 years those regional languages will disappear, owing to local people’s limited appreciation of their own languages.

“Nafri has the lowest number of mothers using the language and this is alarming because mothers spearhead the use and teaching of regional languages, hence the term mother tongue,” Widodo said.

Widodo also said the perception that the use of regional languages hampered interactions with “outsiders” had prompted people to abandon their mother tongue.

The Language Center has documented 180 local languages all over Papua and West Papua since its establishment in 2002.

“We prioritized the vocabulary of 200 universally used words and over 1,000 cultural words, making the total entries about 1,600 per village,” Widodo said, adding that they excluded standard grammatical rules.

He also said some regency administrations had documented local languages. Biak regency, for instance, has produced a dictionary and grammar books. It also obliges local schools to teach Biak in schools. Fak-fak regency has funded the publication of Iha dictionary publication.

With its limited resources, the Jayapura Language Center has composed the dictionaries of Maybrat/South Sorong, Sentani and Jayapura languages.

“Our target is to combine these works and publish an Indonesian regional language map in 2008,” Widodo said.