When I first went to Pasar Triwindu on Jalan Diponogoro in Surakarta, Central Java, it was in search of antique Kris. I did find some Kris but their authenticity was doubtful, but, I was fascinated when I found an old woman who dealt exclusively in Chinese Kepeng.

The traditional form of Balinese money is the kepeng, also called pis bolong. The word pis must be a shortened version of rupies, the legal tender of Indianized countries for centuries, while bolong, meaning hollow, denotes its peculiar shape, which is round and flat with a hole in the center. The kepeng is of Chinese origin, though, as apparent from the characters that show on the face of the coin. 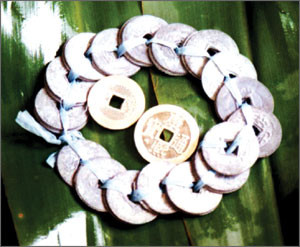 Mads Lange, a famous Danish trader adventurer that operated from Kuta in the middle of the last century, is said to have imported large numbers of Chinese coins. But it is true that the coins had been minted in the Dutch Indies for centuries.

The Dutch had the monopoly of the copper trade, while they entrusted its minting to local Chinese. The kepeng has not been used as a legal tender in Bali since the colonisation (1906). But the coin still has its value and continues to be traded, at the current rate of 250 rupiah for one kepeng. For which purpose decidedly? Religious as is everything else in Bali.

The kepeng is said to embody the punca dathu, the five material elements of the world, corresponding to the five gods and other components of the Balinese compass rose. As panca dathu , the kepeng is used for a whole range of Balinese offerings.

Before people set up to build a structure, they fill the hole with the five elements of the panca dathu — called here the pedagingan or content. When it is completed, they “bring it to life” (uripanga), a ceremony that gives autonomous life to the building, which will then have to get its share of offerings. The canang, a small square leaf basket, one of the most common

Balinese offering, is incomplete until there is a kepeng on top of it, which is said to make up the essence of the offering (sari). This kepeng, the symbol of the five material elements, is placed on top of 5 types of flowers and herbs, symbols of the five main gods of the cosmos, the Pancadewata, namely: Brahma, Wisnu, Iswara, Mahadewa and Siwa. Thus the kepeng and the flowers symbolise the spiritual and material components of the world. When holy tirta water is prepared, one-finds again the kepeng for a similar function as a string of coins circles the neck of the water jug.

The kepeng is also used as a talisman. It is clasped around the arms of young babies so that their soul remains firmly within their body and is not “taken away” by evil influences; the kepeng coins are also scattered on the way to the cremation ground both to ward off evil influences; and as a symbol that “wealth can be taken no farther than the cremation ground, while ones karma accompanies the soul to the world beyond the world.”

There is another use of the kepeng during the cremation ritual: the coins are made into an effigy of the dead, a symbol of its physical components. This effigy is sewn into a white sheet by the relatives of the dead. There are several types of these ukur effigies. The most common replaces the actual body throughout the procession from the house of the dead to the cremation ground. When the body is exhumed, the ukur is put on top of it before it is burned.

The monetary function of the kepeng sometimes blends with its symbolic one. When people visit a priest or a Balinese healer, they usually put some kepeng coins on top of the “notification” offering, the pejati, which is handed to them. This is not a payment stricto sensu, as the amount depends on the goodwill of the person, but rather a contribution. Nowadays, people substitute banknotes for the kepeng.

Another reminder of the kepeng as a monetary symbol is its use in the making of a coin statue of Batara Sedana, the god of wealth and the husband of Sri, the goddess of agriculture. These two gods have a shrine addressed to them in every Balinese family temple, and home families keep the statue of Sedana as a token of wealth, as the word Sedana originates from dana, meaning wealth.