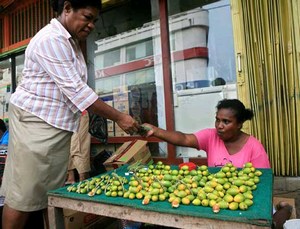 The 2,500-year-old Malay tradition of chewing nuts from the areca palm (Areca Catechu) may be deemed backward by the younger generation in Sumatra and Java but for Papuans, especially in Jayapura, it is a popular social pastime for young and old. In the Papuan capital, one can easily find people as young as five years old with its telltale red blotches around their mouths, a sign they have been chewing the nut. Chewing areca (known as pinang in Bahasa Indonesia) is an anytime-anywhere activity for Papuans who hold the nut in high regard. Known locally as Tarang Habui, Papuans use areca nuts in traditional ceremonies and present them to guests as a sign of friendship and kinship. For the young areca nut chewing is part of the social language. Papuans chew areca nuts with betel fruit and chalk made from ground white shell. Before chewing, they peel off the betel nut skin using their teeth. They then chew the betel fruit which is dipped in white chalk. Afterwards, they spit out the distinctively bright red juice. 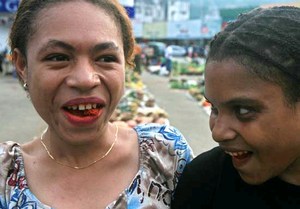 The origin of the areca palm is still debated, with some saying it is from the Malay peninsula and others saying the Philippines. Vast expanses of areca forests once existed on the northern coast of Aceh in an area known as Pinang beach. On the streets of Jayapura areca nut vendors are scattered all over the city. On sidewalks, in front of shops and in markets the nut is available. One packet of pinang, comprising two areca nuts, one betel fruit and chalk goes for Rp 1,000. These packets are known as pinang ojek according to Ricky Yudhistira. Most of Jayapura’s pinang sellers are women. By investing Rp 60,000 a day on ingredients, a seller can earn up to Rp 120,000, resulting in a monthly profit of Rp 1.8 million. One of the down sides to the habit is the red spit that is synonymous with areca chewing. Jayapura streets are stained with red blotches of dried betel/areca and saliva. In some places in Jayapura like Sentani airport pinang has been banned in efforts to keep the area clean.

The other down side is that pinang is believed to cause oral cancer. Pakistan, where many also chew areca, has ruled that pinang packets must carry health warnings similar to those on cigarette boxes.