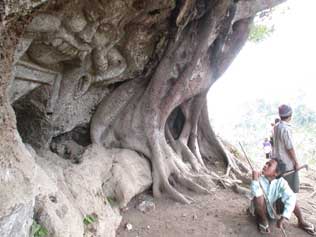 The road running along the hill in Jireg village, Bondowoso, East Java, is deserted. Once in a while, a motorbike breaks the silence. In this arid and rocky area far from the noise of the island’s cities, is a cave containing what could be some of the most important carvings in Indonesia.

Indonesia’s Theravada Buddhists believe the cave, known locally as Gowa Buto, “giant” in Madurese, contains the reliefs in the cave, which depict Buddha’s journey, are the most complete set in the world.

But its remote location has meant it has remained relatively unknown.

The cave is located on a hilly area east of Bondowoso regency, on a section of the damaged road to Situbondo regency, East Java, some 250 km from provincial capital Surabaya.

It can be reached only by car or motorbike, along 30 km of steep and winding road from Cermee district to Jireg village through the Sengon and teakwood forests.

On arrival in Jireg, an impoverished village inhabited by 116 families, the journey continues by foot downhill at a 70-degree slope, along a path of limestone and through tall grass, before arriving at the location. The cave is situated on a steep cliff, covered by an old Sengon tree.

The cave’s reliefs are in three sections, each around 100 meters apart. A relief of a giant’s head, or buto, is found on the ceiling of the first cave, which is situated on the right side of the path.

The second and third sites are located on the left side of the path. Engravings depicting a holy place, buffalo and lotuses are found in the second cave.

Further inside, under a relief of the holy place, lies a spring. Both locations are littered with flowers and offerings, remnants from rituals carried out there.

“The cave is the only one in the world,” said senior council head of Shangha Theravada Indonesia, Dhamma Subho Mahathera, in Surabaya on Aug. 13. Discovered in the 1980s, the historical site is believed to be more than 800 years old.

The local regency, however, has done little to conserve the area’s historical remains.

The Gua Buto, for example is only guarded by a Jireg villager, Misraya, 47. Misraya, who only finished elementary school, replaced his father-in-law, Sumarto, who watched the site previously. Misraya, who also cleans the cave, receives a monthly salary of only Rp 280,000 (approximately US$31.00).

Misraya said he was unfamiliar with the history of the cave. “I don’t know its history. I only work to clean up the place,” he said. He said Chinese-Indonesian Buddhists often came there to pray.

Another Jireg resident, Nisin, 40, who lives around 200 meters from the cave agreed, saying that groups came at least once a month to clean the area and pray.

“They usually drop by at the village to chat with the villagers,” said Nisin.

The site is also overgrown and some of the reliefs are beginning to deteriorate through corrosion and damage from the roots of a large tree.

Head of the Maitreya Foundation Buddhist temple in Bondowoso Yenny expressed concern over the neglected state of the cave. She said local authorities and related agencies should have publicized the discoveries in the area and protected archeological finds.

“According to our faith, there must be a intention behind the creation of a holy place,” Yenny said.

She said she had only learned of the cave in the last week, and that the 1,500 Buddhists in Bondowoso probably did not know about it.

“If it’s an archeological finding, the public should have been informed,” she said.