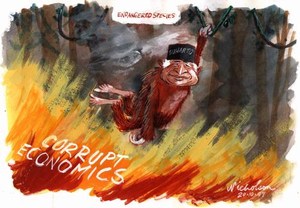 At long last cartoonists are being recognised for their art and insight into the daily happenings across the archipelago. Now, Indonesian cartoonists finally have a place to call home after the Indonesia Cartoon Museum was officially opened with dozens of cartoons and cartoonists featured from around the country. “We want the whole world to know that Indonesian cartoonists have great drawings, which is why we have built the museum,” senior cartoonist Pramono R Pramoedjo said. He said a strict screening mechanism was applied to exhibitions and only selected drawings would be accepted according to Dicky Christanto.

“First of all, the drawings must be fun to look at and they must show some kind of intellectual value, so that people can be amused and learn at the same time,” Pramono said.

“This is the difference between cartoon drawing and usual paintings.

Pramono has worked as a cartoonist for Sinar Harapan daily newspaper for many years and he said as many as 600 cartoon drawings from various cartoonists had been collected for the museum’s initial collection.

Bali was chosen for the museum site because of the island’s strong tourism trade and its international community.

“Many people from many places around the world gather on this island so we hope news about this museum will travel fast,” he said.

Pramono and his colleagues with the Association of Indonesian Cartoonists (Pakarti) said they have been collecting and hunting for cartoon drawings for more than two years.

“There are still many drawings worth collecting, such as those from our founding fathers,” Pramono said.

“I bet people will be surprised to learn (former President) Sukarno was actually also a cartoonist,” he said.

Established on 1989 in Yogyakarta, Central Java, the Pakarti association is now home to some 600 cartoonists from all over the country. Almost half its members were now working for various publications and newspapers as newspapers and many others freelance. Chairman of Pakarti, Jango Paramartha, said he hoped the museum would encourage other cartoonists to organize activities related their work.

“My vision is to have a museum that will accommodate activities related to cartoons so the museum can serve as a home for all cartoonists,” Jango said.

“It is a place where they can freely express themselves through cartoons,” he said.

He said Pakarti would ask the government to join forces in managing the museum.

“As it also serves as one of the nation’s assets.”

The land the museum was built on originally belonged to cartoonist and businessman, Istio Adi, who owned a chain of cartoon apparel shops called Jangkrik 85.

The museum building is on a 1,200-square-meter plot of land on Sunset Road in Kuta and a number of additional facilities are expected to be included in the museum, including as cafe, a cartoon library and an exhibition hall.

“These additional facilities will help the museum generate funds to support its existence,” Jango said.