Book Review: Encounters with The Dani 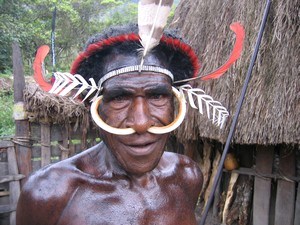 First published in 2003, Encounters With The Dani, a history of contact with the Dani tribe, is a book worth revisiting. It was written, photographed and designed by Susan Meiselas, one of the most influential and important documentary photographers working today. Meiselas, who studied anthropology before she became a professional photographer, consistently pushes beyond the traditional boundaries of documentary photography. Her work includes a wide variety of media, including installation and film. In Encounters with the Dani, Meiselas pieces together found documents that describe the history of contact between the outside world and the Danai of the West Papuan highlands, who were only “discovered” in 1938.

At the end of the book, Meiselas tells the story of the journey that led to the making of Encounters with the Danai. It began in 1988, when she joined a reconstruction expedition of the 1964 documentary film about the Dani, Dead Birds.

Eleven years later, in 1999, Meiselas wrote to the Nederlands Foto Instituut (NFI), saying: “I want to explore the ways in which the Dani have been seen by travelers, anthropologists, missionaries, colonialists, and perhaps themselves, throughout this century, and, through available technology, create access to that work and a dialogue with the Dani about that representation”.

Four years later, Encounters With The Dani was published in New York. Before the publication of the book however, Meiselas exhibited an interactive digital display of the project in 2001 at the NFI, Rotterdam.

The same materials traveled to Montreal as part of Mois de la Photo 2001. Finally it was included in the first 2003 ICP (International Photography Center) Triennial of photography and video in New York, before starting its journey in book form.
Structured chronologically (1938-2000), this book is divided into eight chapters of crucial moments from 60 years of the Dani’s encounters with the outside world.

The first part of the book begins with an aerial view of the Baliem Valley, a chapter entitled Expedition and Accidents of Discovery (1938-1945).

This photograph, taken for the American Museum of Natural History on June 23, 1938, by a wealthy American explorer, Richard Archbold, not only visually represents the valley, but also shows how aerial photography has played an essential role in the use of photography as an instrument of symbolic control of the Terra Incognita.

The camera is employed as a tool with which to fill in the blanks, thereby satisfying our yearning for complete knowledge.

The people, shown later in this book, “were viewed as a curiosity by the press and the public, as savages waiting to be converted by Christian missionaries, or as political pawns in a wider struggle for control of the region”.

The photo of former dangdut queen Elvi Sukaesih dancing with the Dani tribesmen during an Independence Day celebration in 1972 in the chapter called “The Indonesianization (1970-1992)” serves as a fine example of this mentality.