You can walk down the main street of Yogyakarta and buy one of the Javanese headdresses known as Blangkon off any one of the numerous kaki lima that have stalls along the road. The traditional Javanese batik headdress for men is worn at festivals, at weddings and on any important occasion.

But, finding a good quality Blangkon is harder than you think. At the end of Jl Jend A. Yani is located the Beringharjo Markets. It is here you will find a true craftsman of Blangkon as Bambang Muryanto explains:

Is there any connection between blangkon, the traditional Javanese batik headdress for men, and the dignity of Yogyakarta Palace?

If this question was addressed to blangkon maker Slamet Raharjo, he would probably answer that the king and the other male royal family members would ruin the image of the palace if they wore any blangkon sold at local markets.

Indeed, the blangkon that 61-year-old Slamet makes are no ordinary caps and cannot be found easily, even at Beringharjo, Yogyakarta’s biggest traditional market.

This is because they are handmade to order.

Slamet’s blangkon are not only comfortable to wear, but also make the wearer look more elegant.

It is therefore not surprising that Slamet’s customers are not just any customer — among them are the members of Yogyakarta’s royal family, including Sultan Hamengkubuwono X.

“It is usually Gusti Herjun who brings the order to me,” said Slamet, referring to the royal aide who delivers an order from the Sultan of Yogyakarta.

Another VIP customer is President Susilo Bambang Yudhoyono himself, who recently ordered 60 Yogyakarta-style blangkon, including one for himself to wear to his son’s wedding.

“Pak SBY’s size was 59,” said Tugiyem, Slamet’s wife, referring to the Indonesian president by his acronymic nickname. “He chose the motif of klithik kemitir jumputan merah,” she recalled.

Other customers include several noted batik galleries in the historical city.

“We always order blangkon from Pak Slamet whenever we have distinguished guests who want a blangkon of good quality,” said Heru Purwanto of Mirota Batik.

Slamet’s success, of course, is not of the overnight variety. It took him nearly a lifetime to get to where he is presently.

Slamet said he inherited the skill to make high-quality blangkon from his father Notodihardjo, who was also a distinguished blangkon maker in his day.

Notodihardjo learned the craft from a close friend of his, Karto Thole, a blangkon maker who received orders from the royal family.

Karto trained Notodihardjo in the traditional craft because he was often overwhelmed by orders. In teaching Notodihardjo how to make a good blangkon, he could ask for help in meeting his numerous orders.

When Karto died, it was thus Notodihardjo who continued the business. Slamet said that he started trying to make blangkon when he was 27. Every time he finished making a blangkon, he showed it to his father for an evaluation.

“But back then, the blangkon I made were sold at market,” said Slamet, who has only completed elementary-level education. He added that he started receiving orders for custom-made caps only after he was considered to have mastered the expertise.

Making a blangkon, according to Slamet, is actually not so difficult. What is needed are simply diligence, care and concentration, along with the endurance to sit on the floor for hours. 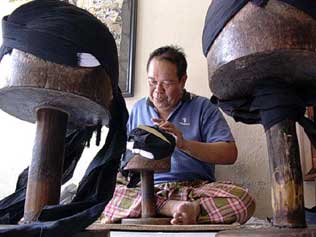 Once they start making a blangkon, a craftsman is required to sit cross-legged on the floor. A wooden stand, locally known as klebut, is placed in front — this is where the blangkon being made is placed during the process.

After it is folded according to a specific pattern, or diwiru in Javanese, a batik cloth of 115 meters by 115 meters is glued on to a pattern, which is usually made of thick carton paper.

This part, which forms the outer shell of the blangkon, is then sewed on to the main structure, called congkeng, made of women dried pandanus leaves.

The size of the congkeng is made with precision to fit the head of the customer.

“Sewing the pattern to the congkeng is the most difficult part,” said Ratijo, the sole apprentice to Slamet at his house and workshop in Bugisan.

This particular stage in making a blangkon needs special expertise, as it must be executed so that the stitches are neat and fine, and are not visible on the outer shell of the cap. This determines the beauty of the finished blangkon.

In order to achieve these fine stitches, the blangkon maker typically utilizes a metal thimble to cover his fingers as he pushes the needle and thread through the congkeng as well as the carton-paper pattern.

Slamet has been in the blangkon-making business for 34 years, through which he has been able to support his family of six. At present, three of his four children are studying at university; his house, the walls of which were previously made of simple woven bamboo, are now of solid construction material.

“In 1999, I used the money from Gus Dur to mend the roof and the floor,” said Slamet. The former president had then ordered 115 Surakarta-style blangkon.

Slamet was also satisfied with his craft, because by continuing to make blangkon, he felt he was contributing to preserving the magnificence of the Javanese culture.

He said he could not imagine what would happen if high-quality blangkon were not worn in sacred ceremonies. It was also unfathomable to him that members of the royal family would wear blangkon of lesser quality during royal ceremonies.

It is indeed such thoughts that has prompted Slamet to transfer his skills and expertise to anyone serious about learning to make high-quality blangkon.

“If I do not transfer this expertise to the younger generation, it will be useless. There will be no blangkon of good quality anymore in the future.

“The image of the kraton (palace) as well as the royal family will simply be ruined if they wore just any old blangkon,” he said.

Slamet has already succeeded in creating a new generation of blangkon makers of his caliber. But his “throne“, he said, would go to his sole apprentice Rujito.

“(Rujito) has mastered everything that I have mastered,” said Slamet, the reigning master blangkon craftsman.