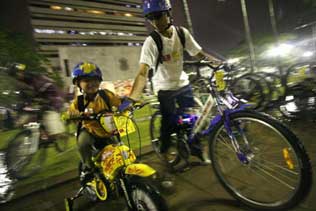 The group Bike to Work (B2W) won a victory after two years of campaigning with the Jakarta administration promising to provide special bicycle lanes along city streets.

“More people commuting to work by bike has pushed the city to build traffic lanes for cyclists,” Deputy Governor Fauzi Bowo said at the climax of a series of events to commemorate the first-ever National Bike to Work Day on Aug. 25.

Fauzi, who will be sworn in as Jakarta’s first directly elected governor in October, has been an advisor for B2W since its establishment in August 2005.

The group used the ceremony to hand Fauzi a specially designed bicycle. The same type of bicycle, valued at Rp 1.4 million, has also been given to, among others, State Minister for the Environment Rachmat Witoelar, Trade and Industry Minister Fahmi Idris and State Minister for Research and Technology Kusmayanto Kadiman.

“It will be an alternative (form of) transportation in the capital … it makes us healthier, too,” he said.

There are currently about 3,000 members of B2W in Jakarta, most of whom ride their bikes to work every day.

Despite the group’s successes, its membership pales in comparison to the 3 million motorcycles and over 2.5 million private cars that travel on city streets every day.

Jakartans breathed “clean air” for only 45 days last year, according to the City Environment Management Agency.

The City Transportation Agency said that it would be able to set up special lanes for cyclists, including along Jl. Yos Sudarso in North Jakarta and Jl. Ahmad Yani and Jl. DI Pandjaitan in East Jakarta.

“As for the high density of traffic along Jl. Jend. Sudirman and Jl. MH Thamrin, we could apply a system such as in Bogota (Colombia) by taking 1.25 meters of the existing 3 meter pedestrian lanes for the cyclists,” agency head Nurachman told Antara.

The administration has started building parking lots for cyclists to be integrated with the busway stops.

“We are now building parking facilities at busway stops in Kalideres (West Jakarta) as well as Kampung Rambutan (East Jakarta) and Ragunan (South Jakarta). We hope they will operate this year,” Nurachman said.

B2W chairman Toto Sugito said he was optimistic about the construction of facilities for cyclists.

“We will continue boosting public awareness about switching to non-emitting vehicles to protect the city,” he said

Toto said that B2W has also raised the issue of global warming as another way of making the public aware of the importance of reducing the use of private cars.

“We’re not asking motorists to stop using their private cars but we are inviting them to bike at least one or two days a week,” he said.

“By doing so, (we) will reduce fuel consumption and clean the city’s air.”