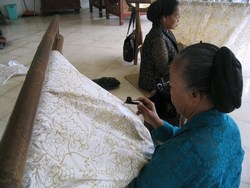 Batik is a popular decorated textile but for Javanese, it means much more — it embodies a philosophy that holds importance from the cradle to the grave. It is still a common practice to wrap newborns in batik cloth, and a piece of batik selendang (scarf) is regularly used to carry the baby around. When someone dies, batik will cover the body of the deceased and seven pieces of batik are usually used to cushion the corpse. At this time, batik with a parang rusak pattern or a bird design are not supposed to be used. The values represented in Indonesian batik are considered significant enough by advocates to push the government to nominate it for the United Nations Educational, Scientific and Cultural Organization (UNESCO)’s list of intangible cultural heritage, which will be first inscripted in September 2009.

The plan — set in motion by the Indonesian Chamber of Commerce (KADIN), the Indonesian Batik Museum Institute and batik communities — is expected to be realized before the nomination deadline of Aug. 31 this year as Stevie Emilia writes.

UNESCO’s program specialist for culture, Himalchuli Gurung, said there were two intangible heritage lists, made possible under the 2003 Convention for the Safeguarding of Intangible Cultural Heritage, which was enforced in April 2006. Indonesia ratified the Convention, which has some 90 member states, in October last year.

Gurung said in other countries, the inventory work has been completed much faster, making the nomination process easier. Japan, for instance, has an institute especially assigned to do the job.

“There’s discussion that China might propose 50 since they’re way ahead in documentation…,” Gurung said.

UNESCO will also incorporate the 90 Masterpieces of the Oral and Intangible Heritage of Humanity proclaimed between 2001 and 2005 — before the Convention went into force — into the Representative List.

From Indonesia, UNESCO proclaimed wayang puppet theater and Indonesian kris among the Masterpieces in 2003 and 2005 respectively.

Gurung was aware of the recent “tension” between Indonesia and neighboring Malaysia, allegedly for claiming Indonesian traditional arts, from batik to songs and dances.

She said both countries could “have” batik, and the material could be found around the world, like in African or Indian batik.
“But the thing is, Indonesian batik is so meaningful in a sense that it still has the traditional practice, rituals and customs behind it.

“Again, the value of batik is its intangible heritage, like how it is made, and it is still widely used for rituals, like wedding ceremonies. So it’s more about the meaning behind batik, the philosophy.”

A paper presented during the recent discussion with UNESCO, organized by KADIN, explored the close connection between the Javanese philosophy of life and batik, which includes gamelan traditional orchestra, court dances, religion, wayang puppet shows and dance drama.

The paper — which included contributions by noted designer Iwan Tirta and batik collector and writer Asmoro Damais as members of the Indonesia Batik Museum Institution — found the connection between gamelan and batik showed in that many batik patterns share similar names with certain gamelan melodies, like Gending Pandelori, Srikaton, Pisanbali, Kawung and Gambirsawit.

Batik is also inseparable from Javanese life — annual offerings to the guardians of Java’s main volcanoes and the Goddess of the South Sea still include pieces of batik cloth.

The rulers of Yogyakarta and Surakarta Palaces always use prescribed patterns like the parang design.

Batik worn during dress rehearsal of the sacred Bedaya Ketawang dance is always the kampuh parang rusak, while for other Bedaya and Serimpi dances, the batik is always a parang pattern, in this case parang curigo latar putih, parang rusak or parang kusumo.

There is also a belief that certain patterns bring bad luck if worn on unsuitable occasions, such as the tambal pattern, which is avoided by a bridal couples as it is feared to bring in patchy luck, like the material’s patchwork pattern, while the kawung pattern should not be used to cover the body of a person who dies on a Saturday.

Yogyakarta Sultan, for instance, never wears the kawung pattern since it is considered to be a forbidden pattern for royalty.

The museum members said batik had a legacy that married the tangible — the cloth and the income — with the intangible: the moral teachings and religious beliefs of Javanese philosophy.

“It has been lifted to a national iconic art, and it is still going strong,” the museum members said.