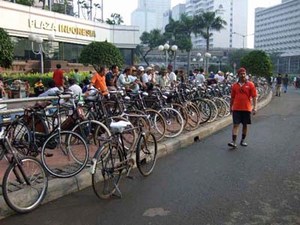 Every Sunday morning, members of the Batavia Ontel Bicycle Community (KOBA) gather at Hotel Indonesia traffic circle to talk, display their bicycles and remind Jakartans of their city’s history. While teems of youths and families choose to spend their Sunday mornings relaxing under trees at National Monument park further north, bicycle enthusiasts have slowly begun to grow in number and have attracted a sizable amount of interest from passersby. The community is one of many groups that participated in Car Free Day on March 30 as part of a campaign to reduce pollution and dependence on private motorized transportation in the city. The Sepeda Ontel, one of the bicycles displayed, is a classic model imported into Indonesia during the Dutch era.

Although over 50 years old, these bikes can still stand up to the considerable challenge presented by Jakarta’s uneven roads, and a growing demand among club members has tagged them with a hefty price according to Thomas Barker.

Sukiman, one of the club’s oldest members, said before KOBA’s formation a group of ten enthusiasts met Sundays at Monas.
Slowly, through their commitment to their passion, they attracted more and more to their community.

“We were all enthusiasts,” he said. “We have moved forward from then, and our achievement makes me proud.”

Chandra, KOBA’s head and founder and owner of 16 bicycles, said the club now boasted a membership of around 450.

The enthusiast, now in his late fifties, said on a typical Sunday around 250 members turned up, with each member bringing 3 bicycles on average, producing a showing of about 1000 bicycles.