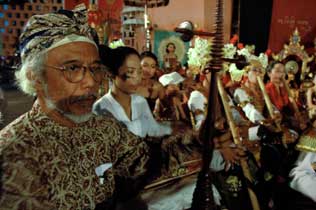 Many Balinese scholars have admitted openly that the esthetic and religious philosophy of Ida Wayan Oka Granoka Gong is simply far beyond their comprehension. His verbose sentences and esoteric vocabulary — pairing Sanskrit words, modern scientific terms and sacred mantras in one sentence — have only further confused his listeners and readers.

The late Prof. Dr. I Gusti Ngurah Bagus, one of the brightest Balinese minds of the 20th century and Granoka’s professor, once said: “I have to concede that for a layman, like myself, trying to understand Granoka’s ideas and esthetic experiments is a super-difficult thing to do.”

Born 55 years ago into a Brahmin family in Budakeling, East Bali, Granoka spent most of his childhood playing gamelan or sleeping next to the musical instruments. Soon he was nicknamed “Gong“, after one of the instruments, and was acknowledged as the child prodigy of Balinese traditional music.

In his youth, Granoka immersed himself in the philosophical and religious treatise of Siwa-Buddha, a Hindu school of thought that is heavily influenced by Mahayana Buddhism tenets.

In 1991, Granoka founded Bajra Sandhi, which on the surface looks and operates like an artistic troupe; close observation, however, has revealed that it is more than a performing arts group.

It is an esthetic and spiritual community that uses the arts as a medium to reach enlightenment. In Bajra Sandhi, Granoka trains his pupils — initially his children and later, the children of his supporters — to be experts in various forms of traditional music and dance, as well as in challenging yoga techniques.

Soon, Bajra Sandhi began presenting their unique performances of ritual art at various temple festivals. It quickly rose to fame as a model of the devotional nature of Balinese traditional arts.

“I believe that, to a large extent, the Balinese audience is astonished by the level of expertise and discipline displayed by the members of Bajra Sandhi,” cultural writer Wayan Westa said.

“The audience simply finds it amazing that these little boys and girls could play different instruments flawlessly, perform difficult yoga positions and have the energy and attention to present a three-hour performance.”

The influence of native Mahayana texts, such as Sutasoma and Sanghyang Kamahayanikan, are quite obvious in this esthetic repertoire.

“Bajra Sandhi is a unique phenomenon. In Bali, arts are created and nurtured for purposes of either tourism or temple festivals.

For Granoka, that personal contemplation has a single core: the enlightenment of man.

“Greed has replaced purity, and the whole universe is in suffering because of that,” he said.

Noted philosopher Mudji Sutrisno commented: “I don’t believe that Granoka’s philosophy is difficult to comprehend. All you have to do is watch the performance with an open heart. There, you will see that these children are celebrating the purity of life.

“Granoka is a wonderful, compassionate artist who has turned the wheel of Dharma for all of us.”