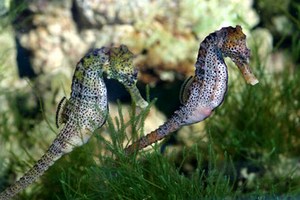 The trafficking of wildlife is an increasing world-wide problem and there is big money for those involved. Personally, I think it’s disgusting to take an animal out of its environment, plunge it into [more often than not] a life of captivity forever condemned to the confines of a cage or fish tank. What is even worse, certain species end up being used for ancient herbal medicines or as trophies for some moron to hang on his wall. Indonesia has an abundance of marine life that is constantly being poached, but, Indonesian customs and excise officers at the Soekarno-Hatta International Airport have foiled an attempt to smuggle around 23,000 dried seahorses (hyppocampus) to South Korea.

Wild seahorses are caught from the wild each year to supply the traditional Chinese medicine market. People in Asia have been using seahorses for thousands of years as a cure for a variety of ailments. Major sources include the Philippines, Indonesia and India. Wild populations of seahorses used in traditional medicine are under threat due to the extremely high demand. Seahorses are used to cure among other things impotence, urinary incontinence, wheezing and old age debilitation.

According to sources at the airport`s customs and excise office, the merchandise (seahorses) were packaged in six bales, and were sent by a company identified as `CV AL` and destined for an address in South Korea. Customs and excise officers stopped the cargo from being loaded onto an airplane bound for South Korea because certain species of seahorses, including those to be transported to Korea, were protected by Indonesian law.