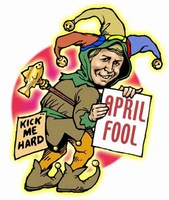 It’s that silly day again today where pranksters in their thousands play practical jokes on other people in the western world – April Fools Day. Two of the best pranksters I know of are Sean and Chris of BootsnAll Travel Company. Over the years, they have ‘April Fooled’ thousands of travellers and all in a harmless manner and in good fun. I even tried it once [only once!] on my Indonesian wife, Candika. After receiving a mouthful of verbiage in about three different languages and a slap on the arm to finish, my April Fool’s Day jokes were no more. Although little of this jocularity is practised in South-East Asia and of course in Indonesia, they do have a special name for it – April Mop.

Today is April 1. Many people, especially members of the older generation, often referred this special date to “April Mop”. Mop is a Dutch word meaning joke. In English it is called April Fool`s Day.

What they know about April Mop is a big lie often carried in the media to attract public attention. But, do they know the history of April Mop. It is a day to tell lies, no matter how serious they sound according to Eliswan Azly.

Yeyen, a student of Dharma Persada University of East Jakarta, when interviewed on Sunday said she had now knowledge about the history of this fool`s day. “What I know about it is only a blunder made by many media to cheat the public.”

“Perhaps, a serious incident took place in the past in April and but how the incident became popular as April Mop is a point beyond my knowledge,” she said.

In the meantime, Feizy who happens to be a student of the Jakarta State University (UNJ) as contacted by cell phone said April Mop was likely linked to a habit of media to tell a lie to the public by diverting their attention to a certain object in the news story.

“What I know April Mop is only that, as my parents never tell me the history of April Mop,” she said while joking.

“When I was still in high school, my teacher never explained it and eventually I made my own interpretation that it has to do with a lie caried in the media,” Feizy said.

Cindy, a student of the Trisakti University, said April Mop did not only have to do with a lie in the media. Such lies can also be said to one`s sweetheart.

“I know April Mop is supposed to be a joke. But such a lie could also be made by someone against another to make him or her a fool,” she said, adding that therefore we should suspect any strange information we received on this particular date.

Seemingly most youngsters of these days do not know about April Mop. Any strange news on this day caused barbaric slaughter of moslems in Spain on April 1, 1487.

Unfortunately, not many moslems in Indonesia know about the history of April Fool`s Day (April Mop) and then preferred to celebrate by lying the public through the media or personal contact.

A moslem intellectual, Ir H Asmara Dharma, as contacted by phone at his home in Medan said the celebration of April Mop was preceeded by a big attack by western troops in Spain which was at that time under the rule of a moslem caliph in March, 1487.

According to him, cities in Spain like Zaragoza and Leon in North, Vigo and Forto in East and Valencia in West, Lisabon and Cordoba in South as well as Madrid in Central City and Granada as a port were occupied by the attackers.

The Moslem community who survived in the attack were promised not to be harmed if they wished to abandon Spain by ships already made available at the port of Granada. Western troops pledged to let moslems go free by ship if they surrendered their weapons.

At the time when thousands of moslems without any weapon gathered at the port of Granada to wait for their turn to leave Spain as promised by the troops, they were slaughtered viciously and their ships set on fire.

Asmara further said the genocide of moslems and the breaking of the promise happened on April 1, 1487 which was then known as April Fool`s Day. Furthermore, this incident was a ritual popularized as “April Mop” (this term became popular in Indonesia during the Dutch colonial times, mop is a Dutch word meaning joke). It was later used to criminalize other people by the news and action.

After knowing the history of April Mop as decribed by Asmara, Yeyen said what the media had done on April 1 in the country was a bad thing from the west who easily cheated the public as what the western troops had done to moslems in Granada in the distant past.

On the other hand, Feizy even said the April 1 deserved to observed a day of mourning for moslems.

By celebrating the West`s lie which ended in the mass murder of moslems on April 1, 1487, hopefully young moslems are not too easily cheated by the west in many respects of life including politics, he said.

“It is because no single western country wants to be on par with the developing countries especially with predominantly countries. The west is never wish to see moslems live prosperously,” Feizy said.

However, according to Cindy, the April Mop could be a good momentum for moslems to remember a big lie of the west. Hence, this day should be observed as the west`s lie.