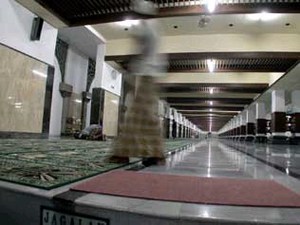 Ampel Mosque is believed to be the oldest in the country. Its founder, Sunan Ampel (otherwise known as Raden Ahmad Rachmatulloh), was one of nine figures who played a leading role in spreading Islam across Java. Sunan Ampel was born in 1401 in Champa, Cambodia. He is a descendant of Ibrahim Asmarakandi, or Maulana Malik Ibrahim, a Champa ruler. When he was 20 years old, Sunan Ampel moved to Surabaya in East Java, which was then ruled by Raja Brawijaya, a Majapahit king.

The king gave Sunun Ampel a 12-hectare plot of land in the Ampel Dento area where he built a mosque and taught local residents about Islam.

One such legend concerns nine graves present in the area, believed to belong to Mbah Soleh, a disciple of Sunan Ampel.

When Mbah Soleh died, Sunan Ampel asked God to send him back to earth so he could help construct the mosque.

“God gave Mbah Soleh nine lives,” Amin said.
Another legend concerns seven wells dug by Sunan Ampel. The water inside these wells is said to have had the power to heal various illnesses.

Due to such legends, Ampel Mosque, located on KH Mas Mansyur street in north Surabaya, has become quite revered in recent years.

“Just look around. Nearly every inch of space is filled with worshipers,” said Amin.

Aside from performing the five compulsory prayers daily, the worshipers also perform their nightly tarawih prayers together, followed by Koran recitals until the break of dawn.

Many people catch up on sleep in the mosque’s corridors while waiting to perform the tahajud prayer at around 2 a.m.

Visitors to the mosque also often visit its graveyard to offer prayers to Sunan Ampel and his disciples.

While praying at graves remains controversial among some Muslim communities, Amin said the practice was an important part of local culture.

“Praying at graves is not asking for blessings from the deceased. We are offering our prayers to those who have died,” he said.