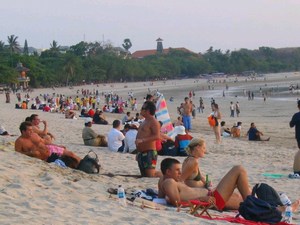 Being Visit Indonesia Year 2008 it was only obvious that passenger arrivals would increase steadily and especially to the safe tourist island of Bali. When I was over in Bali recently, there was an increase in domestic travellers and although this is good to see for the economy of such a small island, it is the other islands in the archipelago that desperately need the tourist dollar. According to Communications Minister Djusman Syafii Djamal predicted the number of air passengers in the country will rise 18 per cent this year from 36.13 million last year. Djusman said his prediction is based on the past performance, pointing out the past seven years have seen a four-fold increase in the number of air passengers in the country. Travellers hate to go by car or bus, with badly battered roads in most parts of the country having been damaged by rain triggered floods in the past several months, he said.

Efficiency in time and growing service of low cost carriers will contribute to increase in the number of people travelling by air, he said.

Meanwhile, a number of major airlines in the country are strengthening their fleet buying or leasing new aircraft amid sharper competition. This year at least two new airlines are also expected to come on line. The launching of the low cost carrier concept has made sea and overland transport companies less competitive.