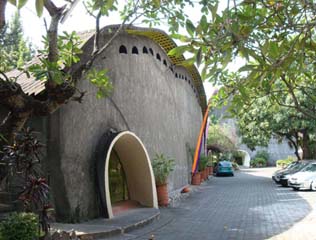 Tucked away on a busy road that runs between Yogyakarta and Surakarta (Solo), and which links downtown Yogyakarta to its airport, is a small, idiosyncratic oasis of artistic pleasures and appreciation: the Affandi Museum.

This gem of a place sits on the banks of a small river — the Gajah Wong — and is perhaps prone to being overlooked as people hurry between cities and to and from the airport. But pausing for a stroll around the galleries assembled here can be a joy that would be a shame to miss.

The museum complex itself was conceived, designed, lived in and opened by the renowned Indonesian master artist whose name it bears. Affandi opened it as long ago as 1962, and even though the artist died in 1990, one feels his spirit alive and well within the complex.

The galleries here are all formed with curving lines and a kind of organic look inspired by nature. Its roofing is said to resemble banana leaves and throughout the structure, straight lines seemed to be avoided in preference to rounded, arched and curved walls.

The first gallery reached upon entering the museum features work and memorabilia of Affandi. Here, early works of portraiture are featured that highlight the technical skills of the artist and how, in his early career, realism and a subtle touch could be discerned in whatever medium he chose to use.

Indeed, one self-portrait in pastels is expert in its execution, as light and shade are beautifully distinguished in the representation of a face that is unsmiling and seemingly worried. But it is perhaps for his later portraits — which exhibit a more vigorous and abstract approach — that Affandi is known, and these are represented thoroughly, too.

Also on display in this gallery are aspects of Affandi’s life as revealed in items that he once possessed — and evidently cherished. For example, a selection of smoking pipes lie on shelves in a display cabinet, and one can easily imagine the artist sitting in front of a canvas, puffing away.

An antique bicycle used by the artist sits among sculptures and carvings, but one of the most outstanding features is a bright yellow car at one end of the gallery. This vehicle, that practically assails the eye with its color and shape, was modified by the artist to resemble a fish.

Providing a similar visual impact are dozens of masks, made in the likeness of the aged artist, that line a curving wall in the gallery. These masks can actually be purchased for Rp 250,000 (US$25.60), but perhaps are only really for the dedicated fan, as they are large and not really very attractive.

The masks also represent a caricature of the artist that spreads to another gallery in the complex; through the many portraits of Affandi rendered by followers and, no doubt, admirers, his image almost becomes cartoon-like.

This caricaturing and cartooning of the artist is further exemplified by a giant statue in which a four-armed Affandi is clad in a sarong and vest, carrying a pipe. The wide grin on the statue’s face suggests a benevolent and admiring motive behind the piece while adding to the sense of humor surrounding the figure.

But humor — or comic quirkiness — seems to run through much of the museum complex. In another gallery, a spiral staircase sports steps rendered in the shape of arms and hands, giving an impression that gentle giants lift the climber aloft.

Humor and idiosyncratic design abound here, such as in a tower that rises as the highest point of the museum but appears to serve no other purpose than to provide a nice, high point from which to view the complex, neighboring river and the general vicinity.

Also evident are Balinese influences, such as the mythical Barong that seems to stand guard at the doorway to one gallery, and wood carvings that seem to resemble Balinese motifs and styles.

Affandi is buried between two of the museum’s galleries, and here too, a Barong-like image adorns the wall overlooking his grave.

Nearby is a small cafe and relaxing area where snacks can be taken and souvenirs bought, from where it is also possible to discern the multi-level layout of the museum. Just below the cafe is a small swimming pool, adjoined by another gallery.

Possibly one of the most attractive aspects of the Affandi Museum is the feeling that one is entering a living community; a community of artists and art lovers that are drawn to the memory and inspiration of a great Indonesian artist.

People can visit the museum to attend art courses and, without doubt, they come to the museum to be inspired by the originality of its design and the intriguing use of shape, color and materials.

In a sense then, “museum” seems a little misplaced in referring to this complex, as the term can conjure images of mundane places with dusty old exhibits — the Affandi Museum suffers no such complaint. “Arts center” or “cultural foundation” might be more appropriate for this dynamic structure and its contents.

Affandi himself did, in fact, live at this site, and it is very evident that he lovingly created a place that he — and others — would enjoy. Thus, “museum” seems too formal and serious a word for this enjoyable and pleasant place.

The delights the Affandi Museum offers can come in many ways, but most significantly it gives visitors an insight to and appreciation of a great Asian artist, his work and life, and it exemplifies original design that celebrates difference.

While many modern-day architecture seem to dwell on boxes of steel and glass, the Affandi Museum, with its curving design and varied materials, offers a welcome respite from this “clinical” and “clean” architecture.