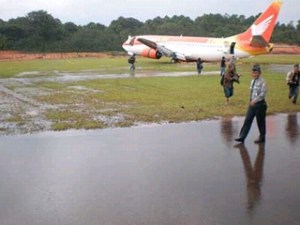 It had to happen eventually. Adam Air has finally been grounded after numerous incidents, the latest being Adam Air Plane with 175 people on board skidding off the runway in foul weather in Batam last week. Sources in the Transporrt Ministry quoted that they decided to revoke Adam Air’s operational specification, effective 12:00 am Wednesday and All of its planes must be automatically grounded. Quarterly safety evaluation found it made violations that could put passengers’ safety at risk. The airline would be grounded until it was evaluated again in another three months, and would have its air operator certificate — a separate safety certification — permanently removed if no improvements were found. This would therefore move the company a step closer to permanent closure.