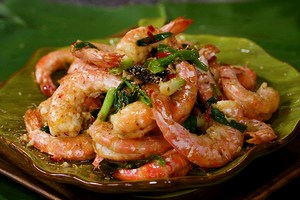 Bungong Jeumpa is the name of a restaurant in Yogyakarta on Jl. R.W. Monginsidi, near the traffic light on the corner with Jl. Magelang. Local residents have dubbed it the “Borobudur Plaza T-junction eatery”. Bungong jeumpa is Acehnese for bunga jumpa, a type of flower that resembles jasmine, with yellowish-white petals that taper into a light mauve base. Bang (brother) Syukri, the restaurant owner, was sitting at the cashier desk one evening in early February, now and again inspecting his cooks preparing noodles and other employees making coffee. With his customers still crowding into the restaurant that night, Bang Syukri was apparently very busy.

He declined to be photographed, but welcomed pictures of his bistro to be taken according to Muram Batunara.

Bang Syukri, who comes from Indonesia’s westernmost province, Nanggroe Aceh Darussalam, related that he opened this eatery around four years ago, after he had run a similar establishment in Wirobrajan, Yogyakarta.

His search for a bigger site prompted him to move to its present location.

An Acehnese eatery, he said, tended to require a lot of space. Aceh has a unique custom of drinking coffee, and this needed a comfortable place for relaxing longer.

“It’s a problem, as (here) we can’t build the same big food stalls like those in Aceh. I wanted to set one up here, with a lot of seats arranged to allow guests to relax while savoring food and drinks,” Bang Syukri said.

He is right. The front section of his restaurant only has two tables, and the seats in the inner section are less cozy, unlike the very roomy stalls and comfortable seats in his native land.

“But we offer virtually the same flavors of Aceh,” he continued. “We make our own mie (noodles) without adapting to the indigenous taste of Yogyakarta. We don’t mean to be arrogant — we just want to allow customers to try the true taste of Acehnese cooking.”

This ranges from typical Aceh side dishes to accompany white rice as well as noodles, fried rice, martabak (crepes with meat, egg and vegetable filling), to such specialties as roti cane (fried dumplings, usually served with lamb curry) and timpan (cake made from glutinous rice flour with srikaya fruit filling) — of course with Aceh’s famous coffee, or kopi Aceh.

These three are the best known eateries among the Acehnese who live in Yogyakarta. As dusk arrives, streams of customers can be seen heading into these places.

Apart from the distinctive flavors of home they offer, the hospitality of the three food sellers also is an important factor.

“Lots of students and other people from Aceh dine here, but quite a number of visitors come from various regions, which is to be proud of. They seem to have gotten used to the Aceh flavor,” Syukri explained to an inquiring customer.

Asked about the background on how he decided to start his business, Bang Syukri answered: “What else could I do? Aceh was strife-torn at that time and we were anxious. I left for Yogya and saw this food business opportunity, so why not try it?”

Those wishing to taste the flavors of Acehnese dishes and drinks may want to try the three most popular Acehnese eateries in Yogyakarta below:

Bungong Jeumpa: at the Borobudur Plaza T-junction, on the corner of Jl. R.W. Monginsidi and Jl. Magelang