A Future for Merauke’s Children: Flores 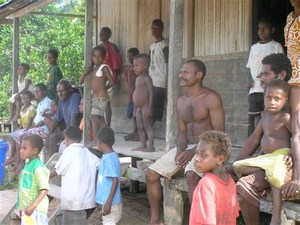 Dari Sabang sampai Merauke berjajar pulau-pulau/ Sambung-menyambung menjadi satu, itulah Indonesia/ (From Sabang to Merauke, the islands are lined up in rows/Connected as one, that’s Indonesia). Those lyrics are from the song Dari Sabang Sampai Merauke, which is taught to students across the nation. It has the ability to excite people and to place within them a feeling of unity — whether they live in Sumatra or in Papua. Merauke district, an area near Maro River, is the outermost part of Indonesia and shares a borderline with Papua New Guinea. At 119,749 square kilometers, Merauke is the largest district in Indonesia.

Neglected in the New Order era, development in the district is lagging behind compared to other areas. Merauke lacks infrastructure in education and jobs and has long been isolated as a result of limited transportation access according to J. Adiguna.

Regime changes, however, have brought improvements to the area. The local administration is currently opening up new business opportunities by building transportation infrastructure such as a new port, giving hope to the locals, the majority of whom belong to the Marind Anim tribe, the biggest ethnic group in Merauke.

Now, the youngsters radiate optimism and confidence, whether they are running along the beach or helping their parents out.
The future of Merauke rests with a generation of children who are desperately in need of opportunities to learn.