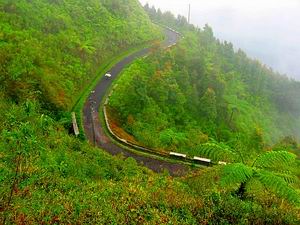 Located about 40 kilometres south of Semarang under the shadows of Gunung Merbabu, Salatiga has a relatively cool climate due to its elevated position. It is home to the Satyawacana University and students come from around Indonesia and overseas to study there.

Salatiga is a medium sized city and one that is steeped in history, and its surrounding areas, some of the most beautiful and interesting to tourists. It is also home to Pura Mangkunegaran and they have just celebrated their 250th anniversary as Blontank Poer and Slamet Susanto reported:

Laid out in the abandoned backyard of an old abandoned house in Kalicacing village in the heart of Salatiga, Central Java, were five offerings that had been carried in a litter to the site by dozens of traditional troops of Mangkunegaran principality.

The offerings were arranged on a long bench placed next to a pile of worn-out goods near an old well, which stood in the middle of the yard covered with grass standing 30 centimeters tall.

After a noble ulema recited prayers for the offerings — which included white and yellow porridge, a number of side dishes made from beans, and tumpeng, or cone-shaped ceremonial rice — they were distributed among the some 60 people attending the ceremony.

KGPAA Mangkunagoro IX and other members of the royal family of Pura Mangkunegaran, or Mangkunegaran principality, were observed at the site attending the ceremony. 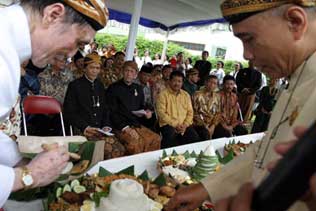 The ulema then said prayers for the thousands of ketupat (rice cake boiled in a packet of plaited young coconut leaves) and dried salt fish to be further distributed to the people who attended the ceremony at the town square.

Ketupat and dried salt fish are said to be the foods that the founder of Mangkunegaran, Raden Mas Said, who was later crowned as Mangkunegara I, and his troops used to bring on the march.

These foods are not only filling, but they also do not spoil easily.
The ceremony was austere, considering that it was held to commemorate the 250th anniversary of the signing of the Salatiga Agreement between the King of Surakarta Pakubuwono III and the King of Mangkunegaran Raden Mas Said on March 17, 1757.

The agreement, which was supported by the Dutch colonial authority, divided Surakarta kingdom into two, while bestowing on R.M. Said the special right and freedom to establish his own palace.

“I’ve never seen such a ceremony held here before to commemorate the establishment of Mangkunegaran, which marks Salatiga as a historical town. I thought the Salatiga Agreement was just a story,” said Sunardi, 30, a street vendor in Salatiga city square — just a stone’s throw from the Kalicacing offering site.

The only sign that indicated an important ceremony was being held in town was a parade of four traditional troops carrying offerings from Salatiga police station to the town square.

The four groups — the Jaya Misesa in lurik uniform, the Ladrang Mangungkung women’s troop, the Warok Ponorogo group and the Chinese troop — were R.M. Said’s core guerrilla fighters in the battle against the Dutch colonialists (1725-1795).

The guerrilla troops moved from one place to another, going through thick forest, climbing mountains as far away as Ponorogo and Pacitan in East Java, to Wonogiri, Rembang and Semarang in Central Java, and Yogyakarta.

His will to rise up against the Dutch colonial government emerged not only because his uncle, Pakubuwono II, had collaborated with the colonizers, but also because his father, Kangjeng Pangeran Aryo Mangkunegoro, was caught and exiled by the Dutch in 1727.

At the age of 16, R.M. Said together with Sunan Kuning of Semarang attacked n 1742 Kartosuro Palace, which was then under the rule of Pakubuwono II.

“R.M. Said lived a very humble life. He preferred to leave Kartosuro Palace and join the people in the guerrilla war against the Dutch,” historian Sudharmono of Surakarta Sebelas Maret University said.

During his 16 years of waging the guerrilla war, R.M. Said had made at least 250 battles against the Dutch, Surakarta Palace and Yogyakarta Palace, making him a war commander of great renown.

Among his monumental fights are the Kartosuro Palace attack (1742), the Kasatriyan Ponorogo fight (1752) against Prince Mangkubumi (Hamengkubuwono I), who was supported by the Dutch, and the Sitakepyak forest fight (1756).

The Mangkunegara king is also known for his hobby of keeping a diary on his daily activities with the troops. He left behind two large chronicles, the Babad Lelampahan and the Babad Tutur, containing notes on his battles upon his death.

The two chronicles, especially Babad Tutur, later became known as unique historical notes, as most babad, or chronicles, were written by the royal scribe to support the king’s legitimacy.

Many historians consider R.M. Said a genius, and position his works on the same level as those of Voltaire and Jean-Jacques Rousseau of France, who were developing a similar style of writing at the time.

According to historical literature researcher Zainuddin Fananie of Surakarta Muhammadiyah University, the “disappearance” of Babad Tutur occurred in 1929 when Mangkunegara VII asked Pigeaud, a noted Dutch historian, to restore the Babad Tutur.

The original chronicle, written in Javanese, is currently stored at the Koninklijk Instituut voor Taal, Landen Volkenkunde Oriental in Leiden under the catalog number KITLV MS No. 231.

The good news is that the Salatiga government is planning to preserve the Kalicacing site.

Jarwadi, head of the art division of the local culture office said his office was proposing to the local government to preserve and rehabilitate the 3,000 square meter Kalicacing site.

“It’s an important site, but it just sits there, abandoned. We’d better turn it into a monument. Otherwise, it will just vanish without trace. Besides, R.M. Said’s fights are still relevant today,” Jarwadi said.